This easy Lentils and Rice recipe is my latest attempt to find a dish in the Mexican vegetarian realm that will keep me full for more than an hour.

It certainly fits that bill and in addition to tasting muy bueno it also comes with an awesome side benefit -- it's ridiculously cheap to make, somewhere in the neighborhood of pennies per serving!

In other words...it's filling, tastes good, and is ultra-cheap to make.  Sound too good to be true? 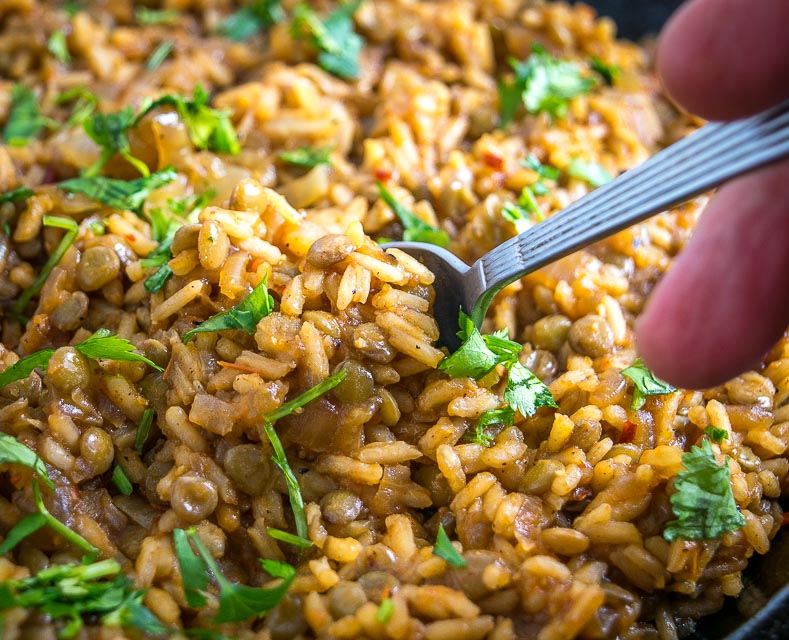 One Pot Lentils and Rice Recipe

We're taking a cue from a popular Middle Eastern dish called mujadara that uses caramelized onions to create a sweet, savory flavor.   Add in some classic Mexican flavors and the result is an ultra-satisfying dish that also happens to be a complete protein.

The most time consuming part is caramelizing the onions so we'll start with that.   Thinly slice two onions and saute them over mediumish heat in a tablespoon of oil. 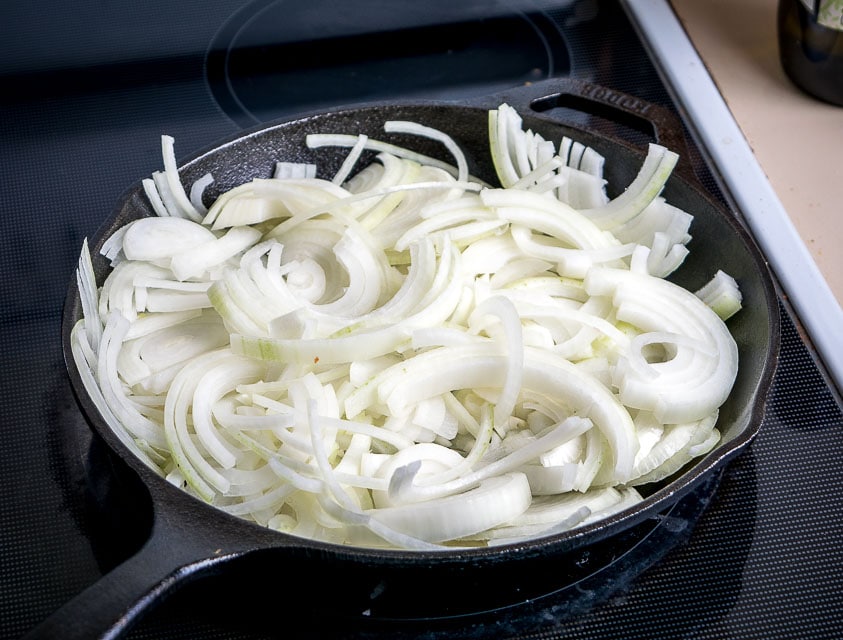 These will reduce quite a bit as they cook so feel free to load up the pan.   As they cook down their sugars will caramelize into some sweet savoriness. 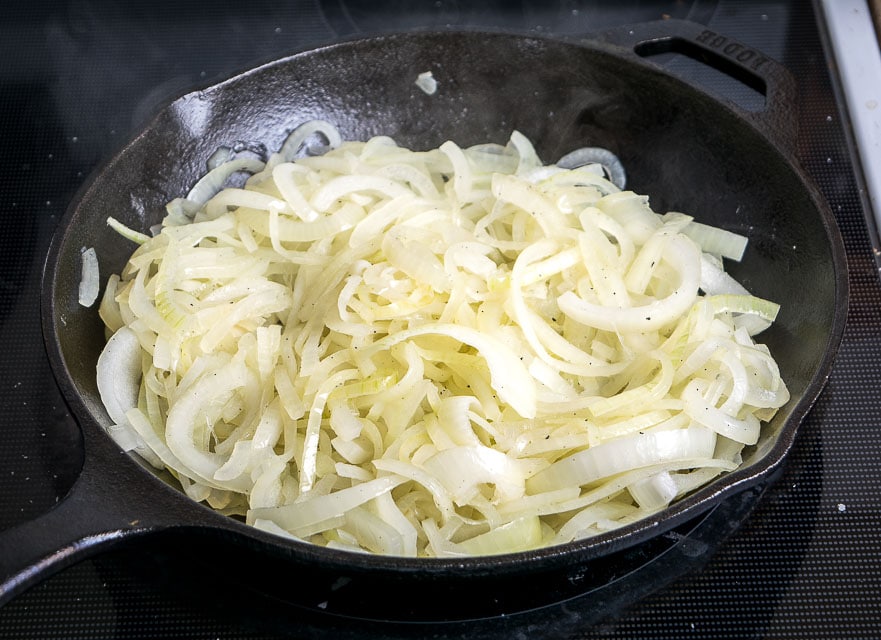 You'll also need to season the onions so after they've cooked for a few minutes give them a sprinkling of salt.  I season them as they cook, adding a pinch of salt at a time, somewhere in the region of one teaspoon of salt total for these two onions. 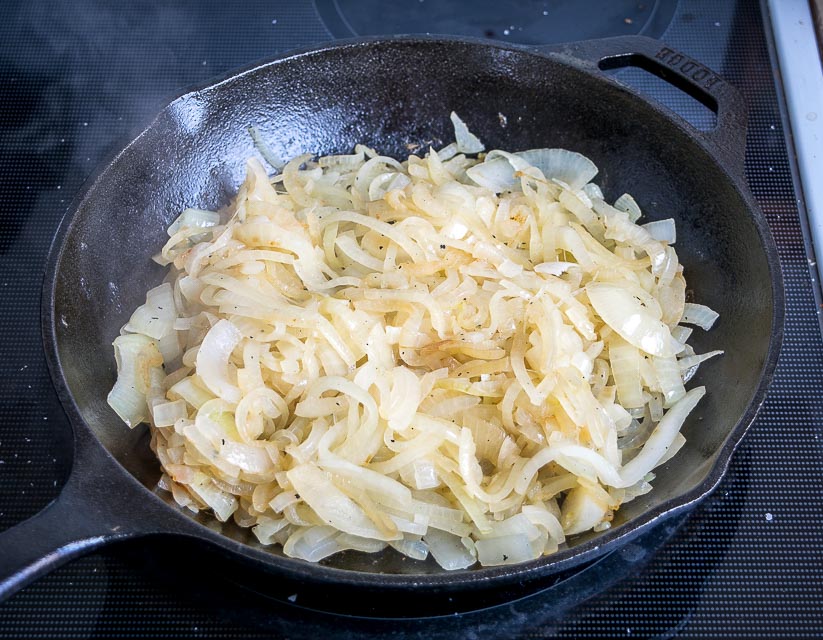 Keep stirring them but no need to hover.  It's okay if they stick a bit as long as you give them the occasional stir. 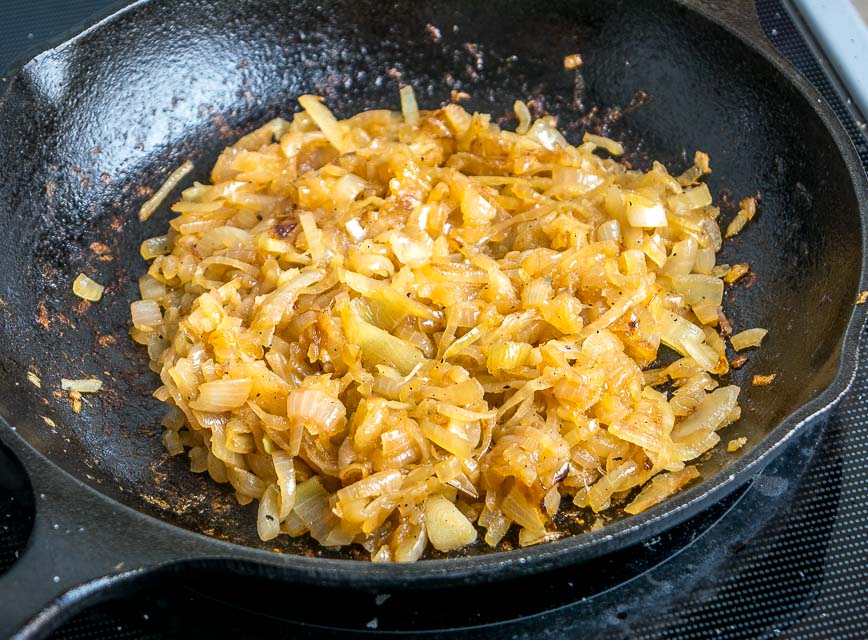 Yum!  I usually stop them somewhere around here for this dish, but you can definitely take them a little farther if you want.  Here's what another ten minutes will do: 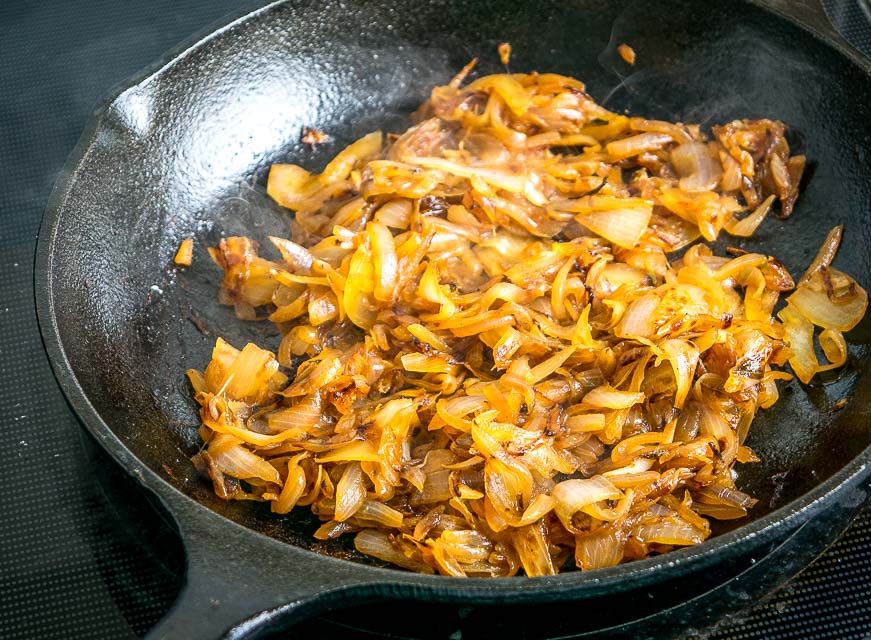 And keep in mind that you can always make more than you need as they work great as a garnish in all sort of dishes (burgers!).

So you'll need about 30-40 minutes to caramelize the onions.  This gives you plenty of time to prepare the other ingredients.

After starting the onions I usually put two tomatoes in the oven at 400F.   These usually need about 20-25 minutes to fully roast but it's fine to take them out a bit early if you have to. 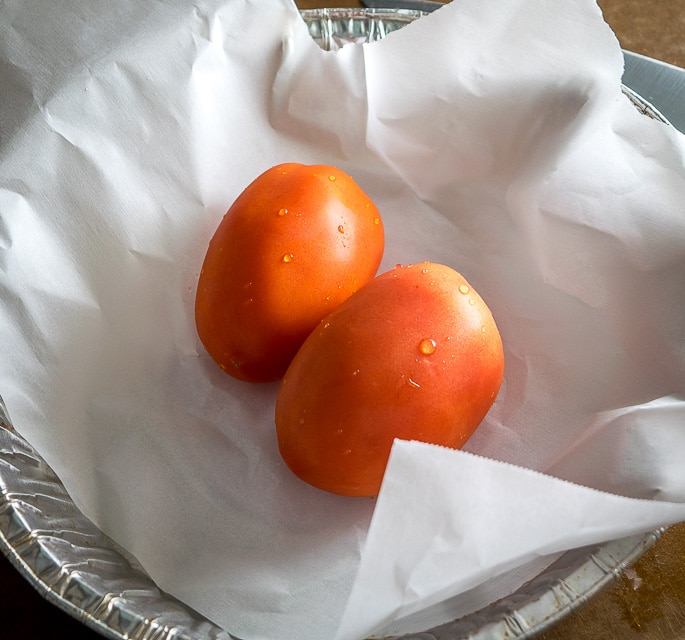 Since we're turning this into a one pot dish, it's worth parboiling the lentils as they tend to have a longer cook time than the rice.

Add a heaping cup of water to 1/2 cup of lentils in a saucepan. 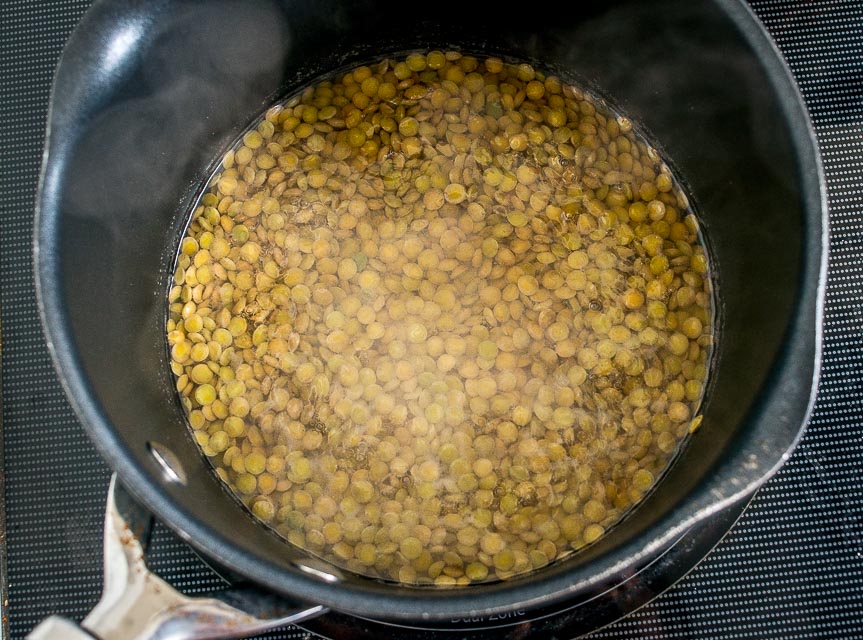 Bring to a boil and then let them simmer for 10-15 minutes or until most of the water is absorbed.  Drain and set aside.

You can use any type of lentils for this dish but keep in mind that red lentils tend to get a little mushy when cooked.  (More info on different lentil types.)

This is a concentrated version of our Tomato Chipotle Salsa but without the onion because that department is already taken care of in this dish.

Once all of these ingredients are on deck then you can start assembling them in the pan. 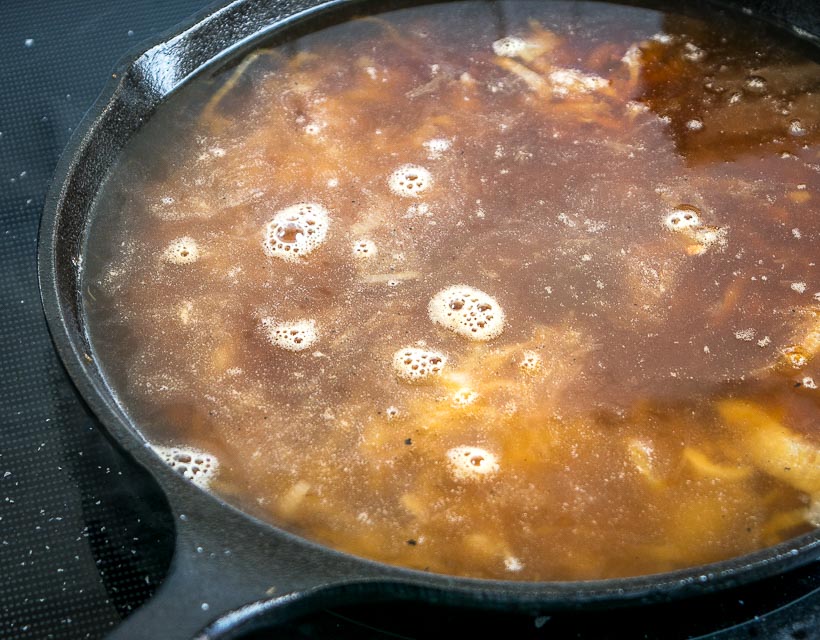 We're using a homemade vegetable stock from this recipe.  You are welcome to use water and you'll still get a great meal, but keep in mind that you might have to up the seasoning and spices a bit if using water as the base.

I usually add a teaspoon of salt here too, just before adding the other ingredients.  Let this simmer for a few minutes; it'll take on a deep golden color from the caramelized onions.  Nice!

Now it's time to add the rest of the ingredients: 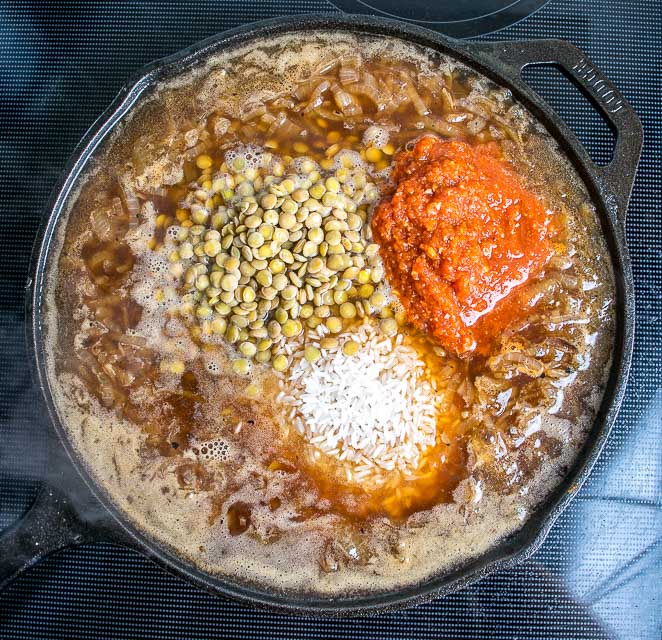 So in the above pic we've added:

Give it a good stir and bring it to a boil. 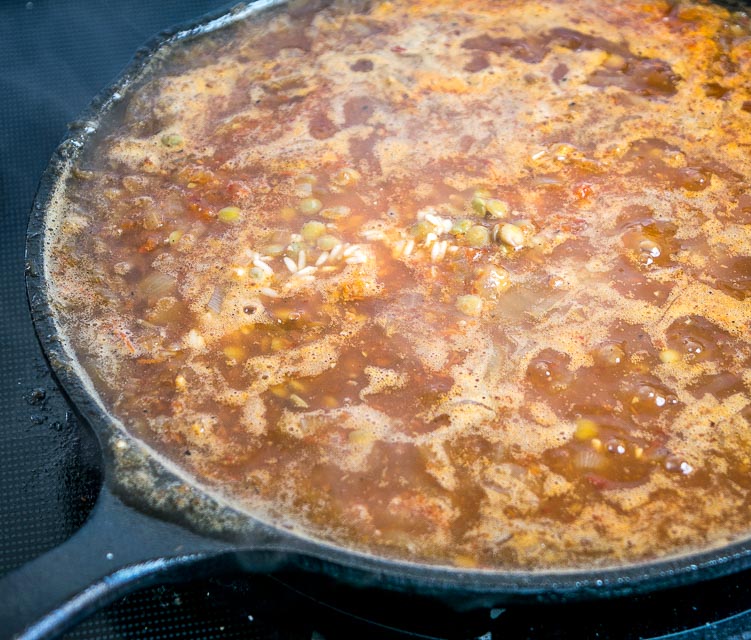 And yes, we are maxing out this pan's potential (10-inch cast iron pan).  Feel free to upgrade to a larger pan if you want a less messy version.

Once boiling, reduce heat and let simmer until most of the liquid is absorbed. 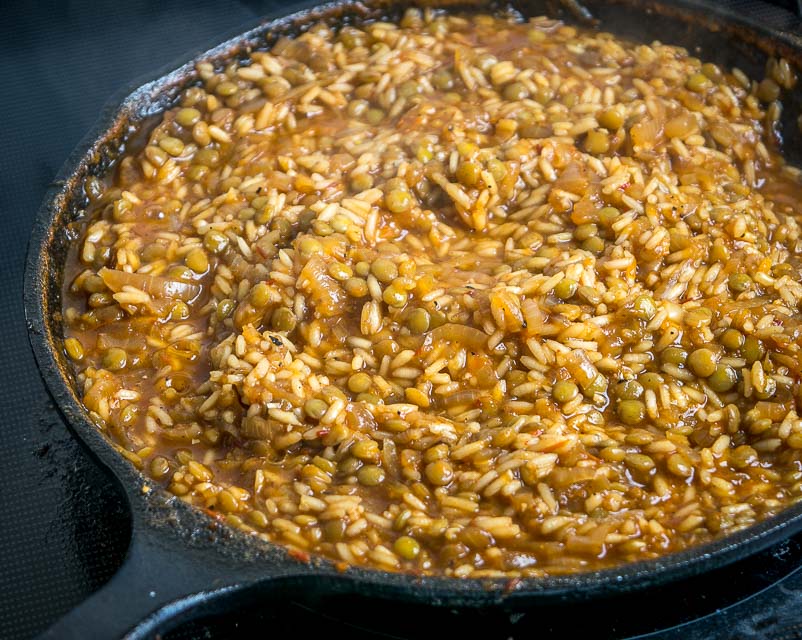 Take a taste for seasoning.  I added another 1/2 teaspoon of salt here (so 1.5 teaspoons salt total) but this will probably depend on your choice of stock/water.

Remove from heat and cover, letting it sit in its own steam for 5-10 minutes. 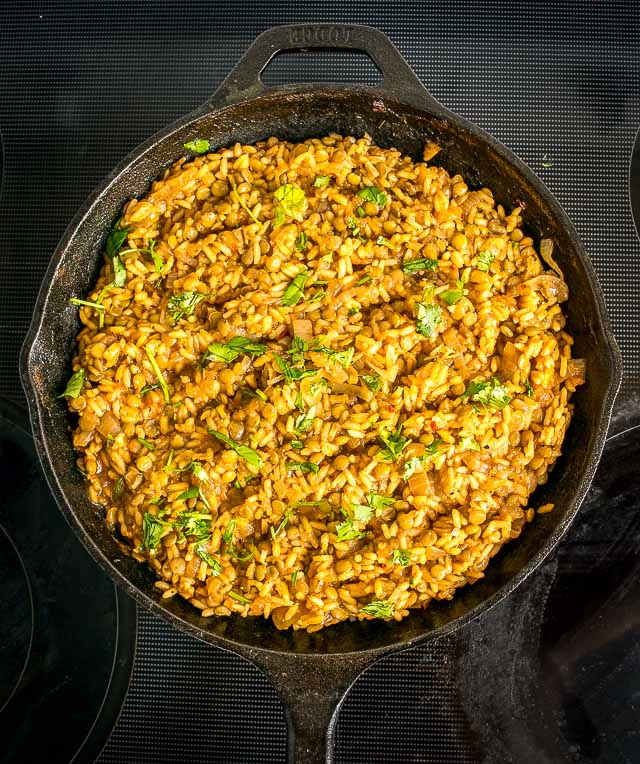 You're left with a flavorbomb Lentils and Rice dish that can be served straight out of the pan.  You can garnish with chopped cilantro but to be honest it doesn't need much else.

One other thing I want to mention...

I've tried this dish using a 1:1 lentils to rice ratio but it seems like the lentils dominate too much when that's the case.  Using only 1/2 cup of lentils keeps this dish in the Mexican rice realm and that's when it tastes best to me.  Keep in mind though that you can always up the lentil amount (and liquid amount) for a more hearty version. 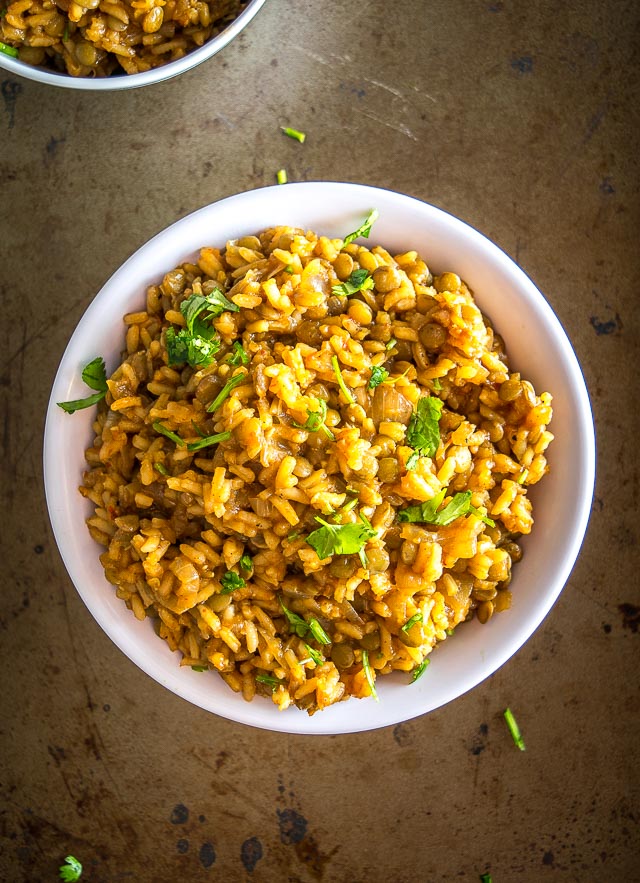 Feel free to ask any questions in the comments section below or you can always send me an email. 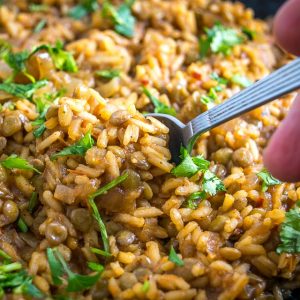 One Pot Mexican Lentils and Rice

Here's an easy way to make a delicious Lentils and Rice dish. You can go easy on the chipotle if you want a milder version. We used some homemade veggie stock and it was delish!
4.32 from 16 votes
Print Pin Rate
Prep Time: 20 minutes
Cook Time: 50 minutes
Total Time: 1 hour 10 minutes
Servings: 4
Calories: 344kcal
Author: Mexican Please

I used yellow onions for this batch but I've tried caramelizing white onions before and they seem to work just as well.    I usually season throughout the caramelization process, adding a pinch of salt at a time (approx. 1 teaspoon total).    I used unsalted homemade vegetable stock for this recipe.   If you are using store-bought stock that's high in sodium you won't need to add as much salt as I did.
Like this recipe?Click the stars above to rate it or leave a comment down below! @mexplease