I used to be so strict when making pot beans at home, but not so much any more!

Now I just improvise and make them whenever I run out.

That means the ingredient list will vary, but the result seems to be surprisingly consistent, so I hope this post inspires you to make a batch at home! 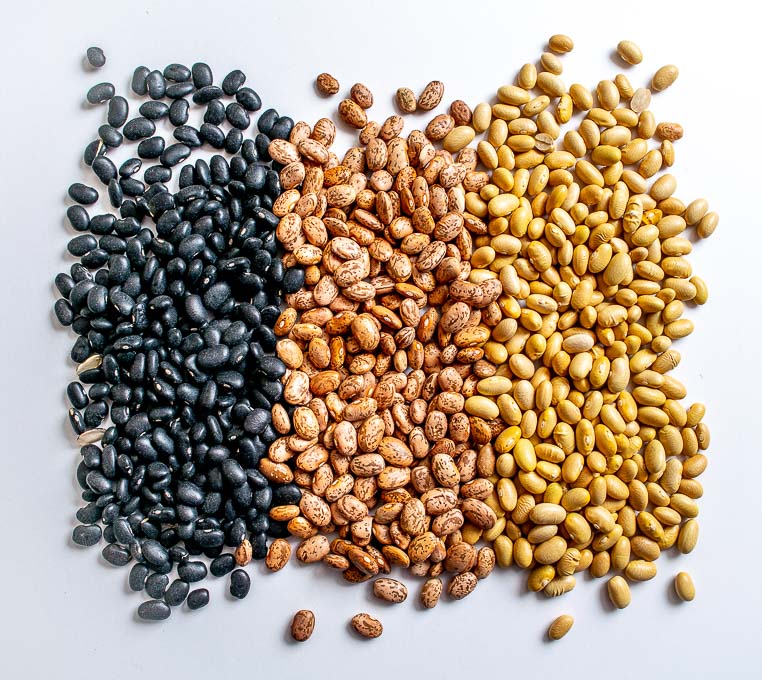 How To Make Improvised Pot Beans

A traditional batch of pot beans simmers away in lard for a few hours.

I got in the habit of rendering lard from pork back fat and using that to make some real deal Frijoles de Olla.   And if I ran out of home-rendered lard, well ... no more beans!

But lately I'm in the habit of storing bacon drippings in the fridge, so I've been using that along with anything else that sounds good at the time. 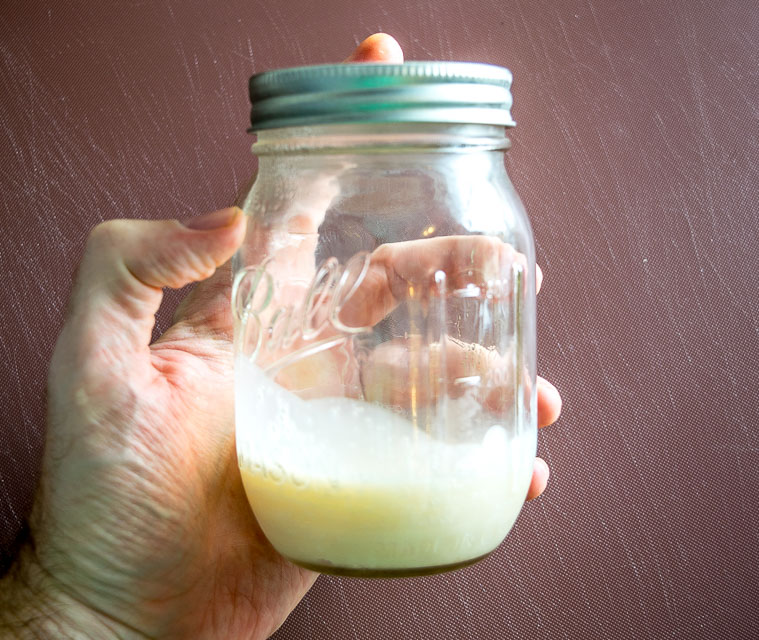 For this batch that means:

And after doing a few improvised batches like this I'm mostly convinced that it's the act of simmering your own beans that creates the majority of their goodness.

Yes, the ingredient list, and a bit of fat, will impact the final flavor, but the simple act of simmering them at home will bring you most of the rewards.  That's good news!

Start by giving a single pound of dried beans a quick once-over. 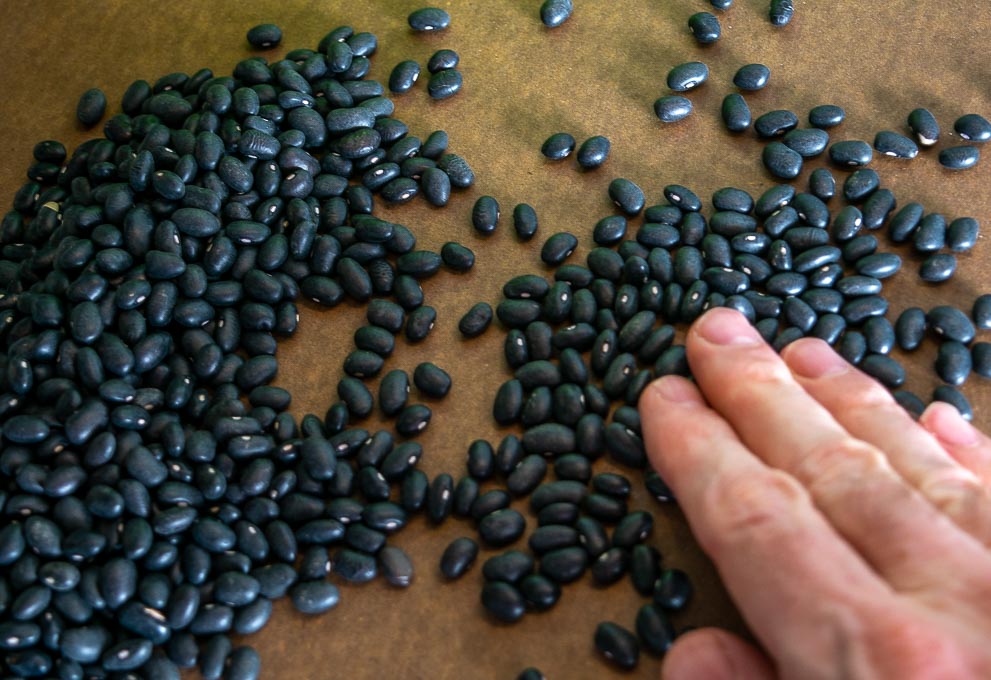 I used black beans for this batch, but you can definitely use Pinto or Peruano.

Discard any stones or strugglers, and then give them a good rinse.

Add them to a pot along with: 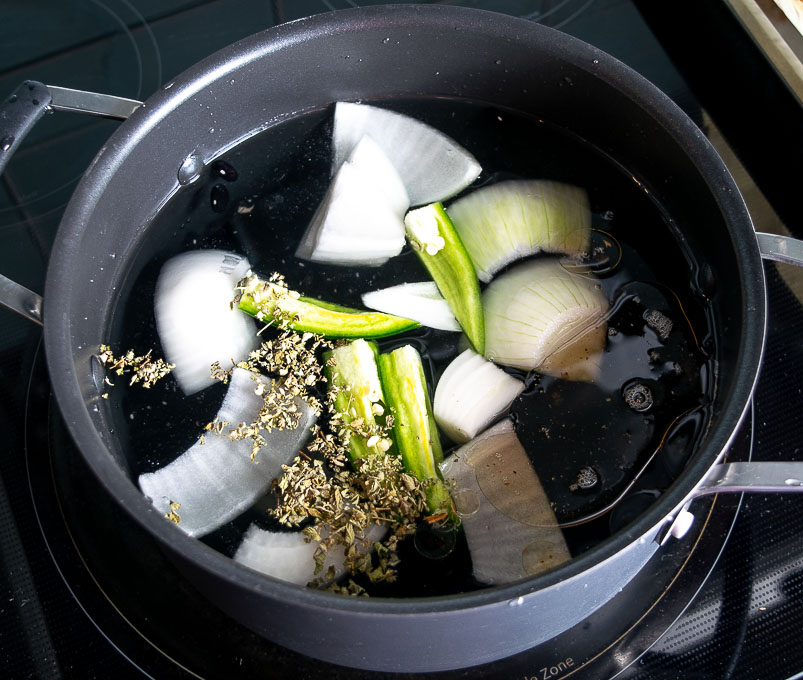 The amount of water will depend on the pot you're using, but ensuring that the water level is about 2" above the beans is a good starting point to keep in mind.  For this pot that was 2 quarts.

Bring this to a boil, then cover and reduce the heat so that it simmers away quietly for the next couple hours (that was low heat on my stove).

I usually start checking on them after 90 minutes or so.  Pull one out and take a bite -- if it's still firm or grainy then they need a bit more time.

Here's how this batch looked after 2 hours of simmering. 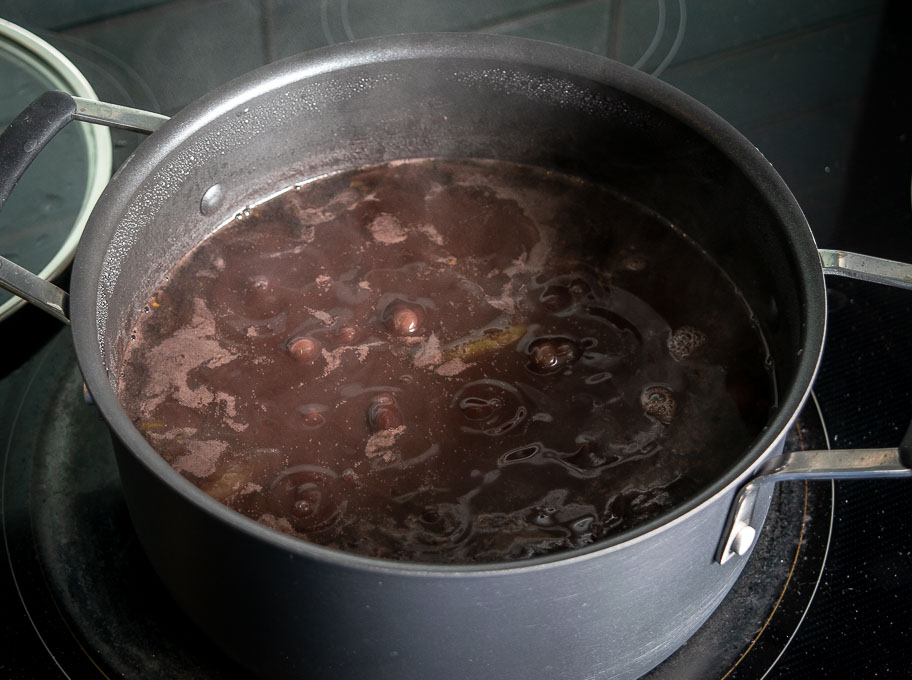 When they are getting close you can add the salt.

Add 2 teaspoons of salt, stir well, and then let them simmer for another 15 minutes or so.

Beans are hyper-sensitive to salt amount so this is probably the most important step!  All beans have their own sweet spot, so it's worth doing some final taste testing and adding more until it tastes right to you.

I added another generous pinch of salt to this batch (so that is just under 3 teaspoons worth, or a just under a single tablespoon). 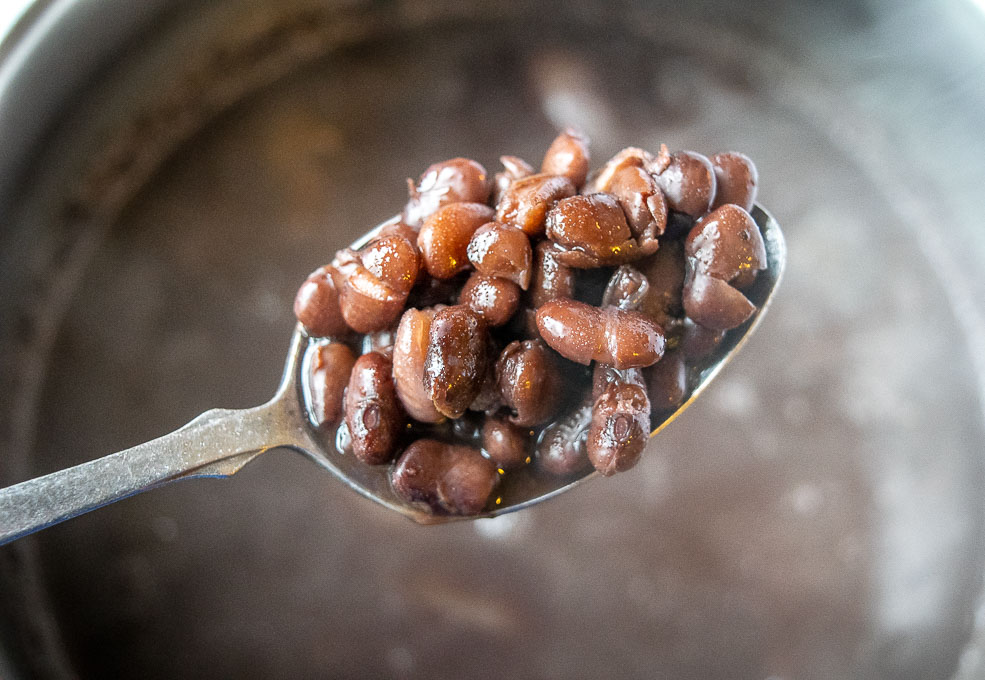 I can usually tell when the salt level is correct because the broth will also taste "right" to me, so it's worth taking a sip of the broth as well.

Speaking of broth, for this batch I didn't need to add any additional water during the simmer.  Sometimes you will (especially if you cook them uncovered) but you can always just add a few more cups to keep the water level above the beans. 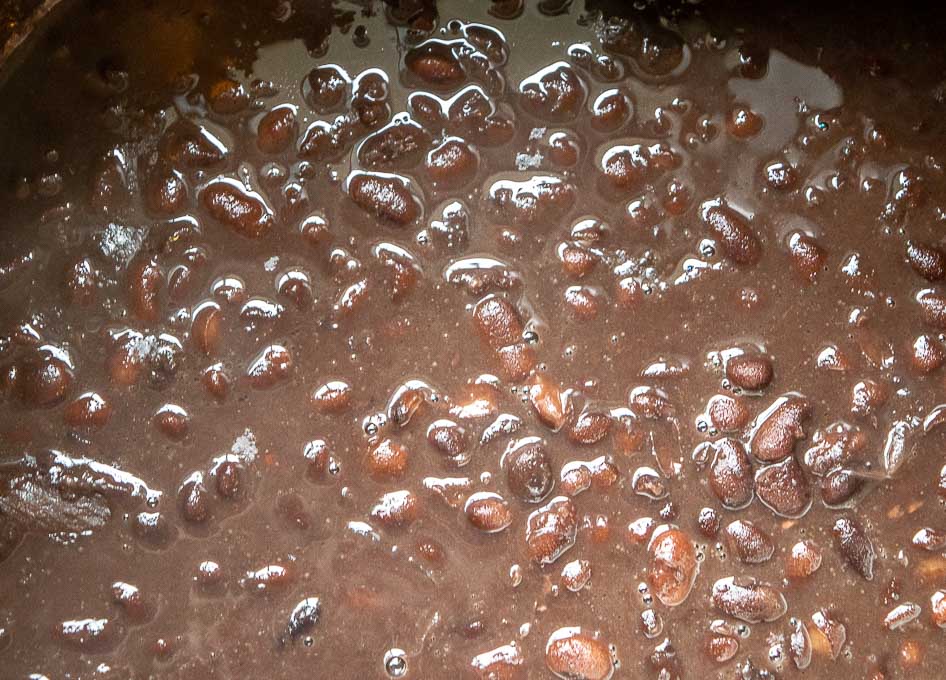 Why is this important?  Resting in the broth helps the beans store longer, but more importantly...

It makes it easy to make refried beans!!  Just put some beans in a skillet along with some broth, mash 'em up, and cook them on medium-low heat until they are the right consistency for you.

That's why I store these in single cup portions with plenty of broth, like this: 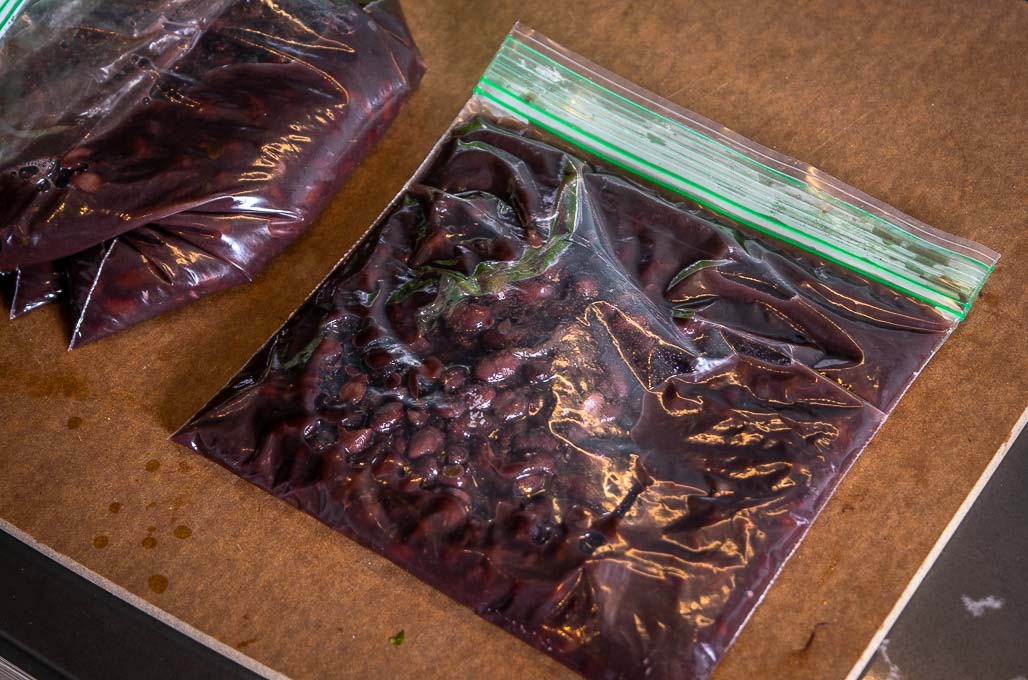 This batch already has loads of flavor right out of the pot, but if you ever feel like you want to add more flavor to your refried beans then see the Killer Refried Beans recipe.

This pound of dried beans made 7 single cup portions of cooked beans.  I put 5 of them in the freezer where they will keep for months, and I put the other 2 portions in the fridge to be used over the next couple days.

Okay, I hope this post inspires you to improvise some pot beans at home!  You'll get a big upgrade in flavor compared to store-bought versions, and it will lead to all sorts of quick, satisfying meals. 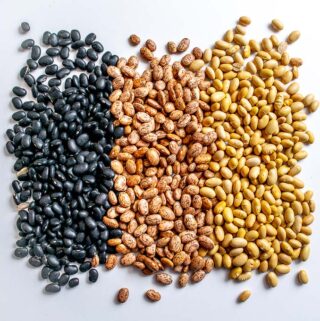 I hope this post inspires you to improvise some pot beans at home!  You'll get a big upgrade in flavor compared to store-bought versions, and it will lead to all sorts of quick, satisfying meals.
5 from 6 votes
Print Pin Rate
Prep Time: 5 minutes
Cook Time: 2 hours
Servings: 14 (7 cups)
Author: Mexican Please

Be sure to do a final taste for salt level!  Each bean variety has their own sweet spot so feel free to keep adding pinches until it tastes right to you.   For this single pound of black beans I used just under 3 teaspoons worth, or just under a single tablespoon.
Like this recipe?Click the stars above to rate it or leave a comment down below! @mexplease

I used these pot beans to make some awesome Bean Tostadas: 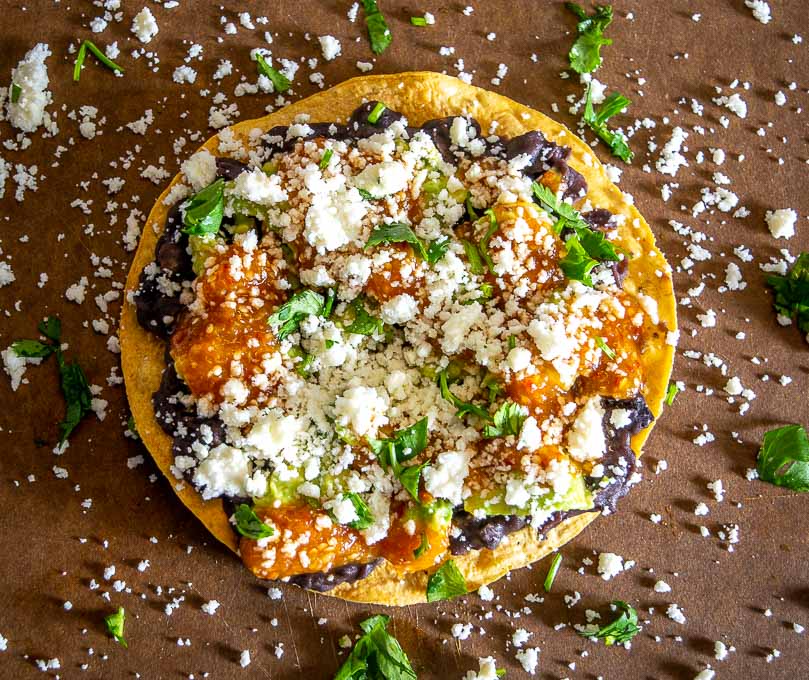