Rendering your own lard is super easy and you'll get a significant bump in quality compared to store-bought lard.  If you're new to this technique please consider giving it a go!

Refried beans, flour tortillas, tamales...they all have a secret ingredient in common that makes them taste Mexican.   What is it? 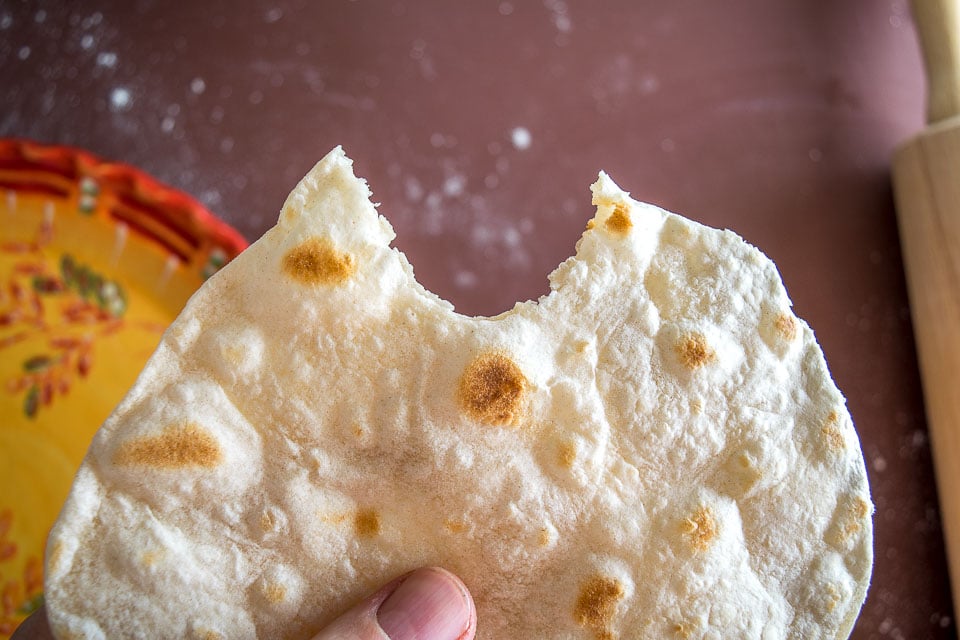 Be honest, when you hear “lard” what’s the first image that pops in your head?

Traffic jam at the main aorta valve? A pair of treasured jeans that you can no longer button?

Lard gets a pretty bad rap these days.  Part of it is misinformation. Part is the fat-shaming culture. And part is the word itself. 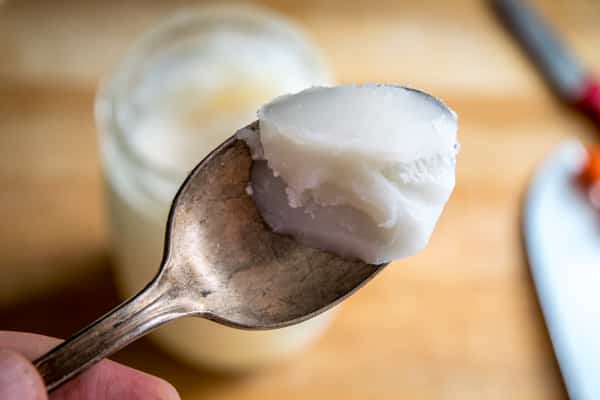 But the truth is, good lard is healthier than most butters that you regularly cook with.  Lard is classified as a monounsaturated fat, so it’s rich in the same fatty acids that the lauded olive oil has.

This is why olive oil has become so popular recently.  It’s loaded with unsaturated fats.  And so is lard.

Maybe it’s just the name.  Lard.  How about from now on we just refer to lard as white butter? 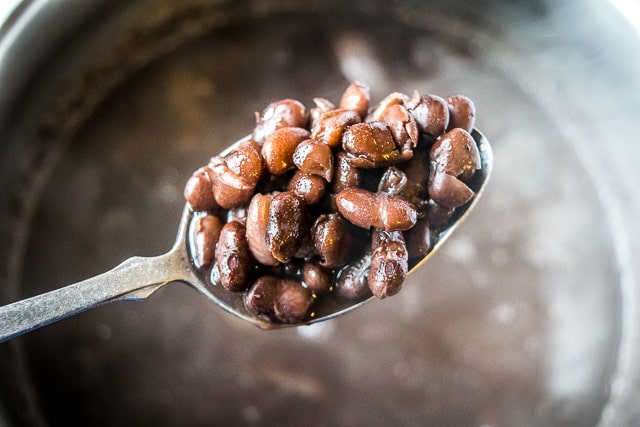 Either way, lard is an integral part of Mexican cooking, used in tortillas, refried beans, and countless sauces.  I hope I can convince a few of you to take a closer look at it!

OK, there are two types of pig fat used to render lard: back fat and leaf fat. Leaf fat produces a lighter, whiter lard that is traditionally used for pastries. Back fat produces a more robust version and is more commonly used for general cooking purposes.

You can usually find both types of fat at your local butcher. You’ll have to ask for it though as they tend to keep it back in the freezer.

Here is what 2 pounds of back fat looks like: 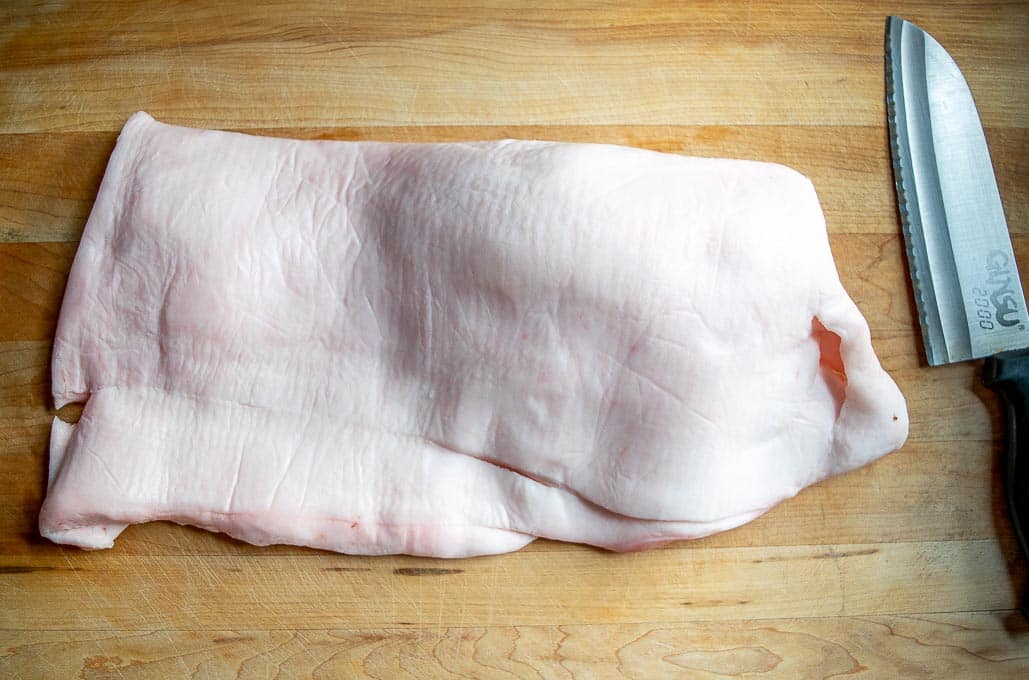 This will produce approximately 2 cups of the cleanest lard you’ll ever use.

The process is simple. We’ll be cooking the fat on low temp, and as the solids produce liquid we’ll strain it off into a holding container.

First, cut up the back fat into evenly sized chunks; about ½ inch works well. There is wiggle room on the size of the chunks, but make sure you are consistent so that the pieces will cook evenly. 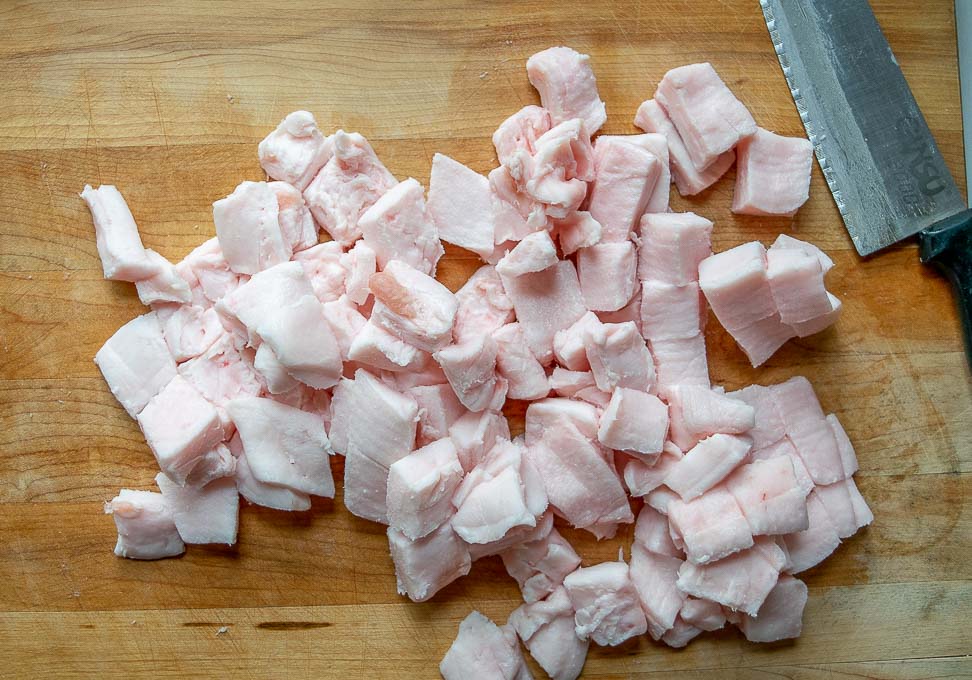 Add a couple tablespoons of water to your pan.

This thin layer of water will prevent some initial sticking and it’ll burn off as the fat heats up. 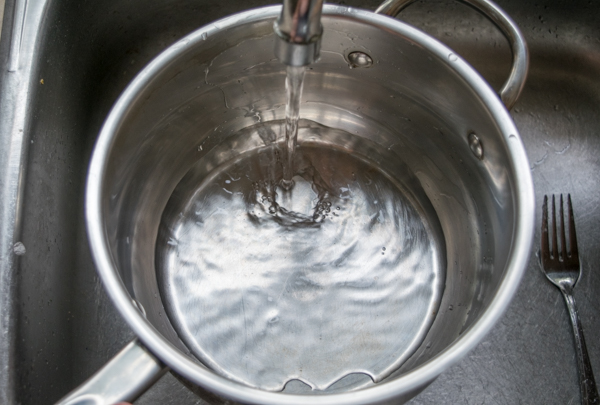 Now add the chopped fat to the pan and cook over medium-low heat. 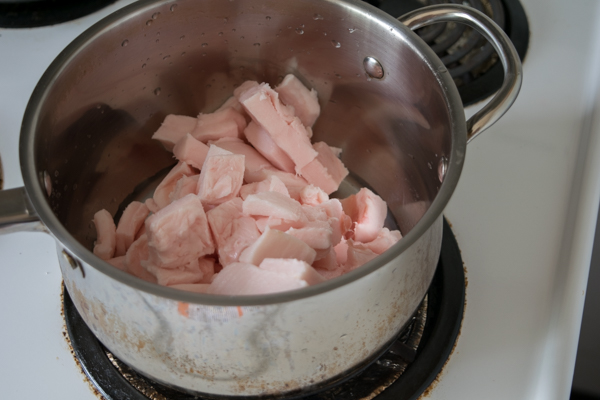 Nothing will happen for awhile. That’s good!

We want to draw out the liquid fat slowly to prevent burning. 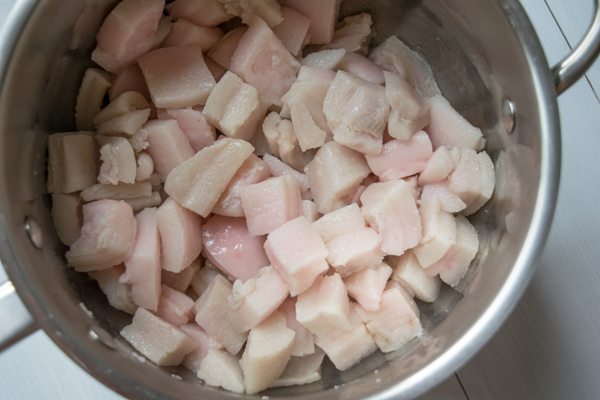 You can stir occasionally to prevent any sticking.

At 30 minutes you’ll be somewhere around here: 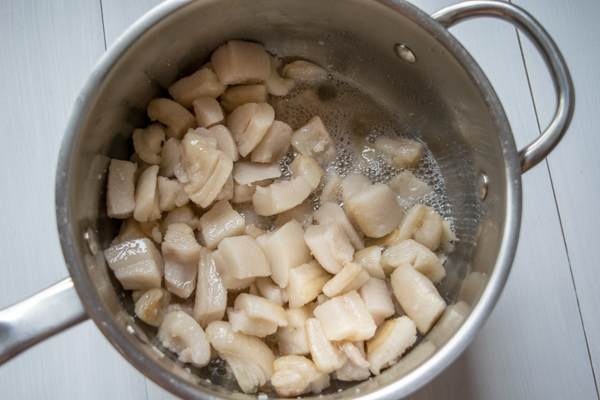 Now we’re talking! Some of the liquid fat is forming at the base of the pan.

And at 40-45 minutes it will look something like this: 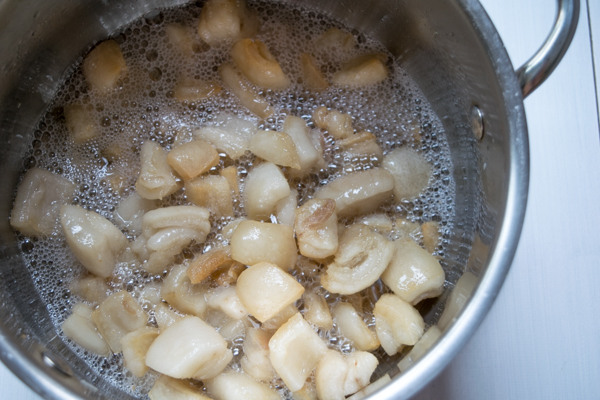 Now it’s time to pull some of the fat out. This prevents any future burning but will also expedite the rest of the process as the solids will have more direct contact with the heat source.

Set up a holding container with a fine-mesh strainer and pour some of the fat through it.  I used a stainless steel bowl for this batch.

I also lined the sieve with a cheesecloth to keep out some of the solid bits, but don't sweat it if you don’t have a cheesecloth as the strainer will suffice. 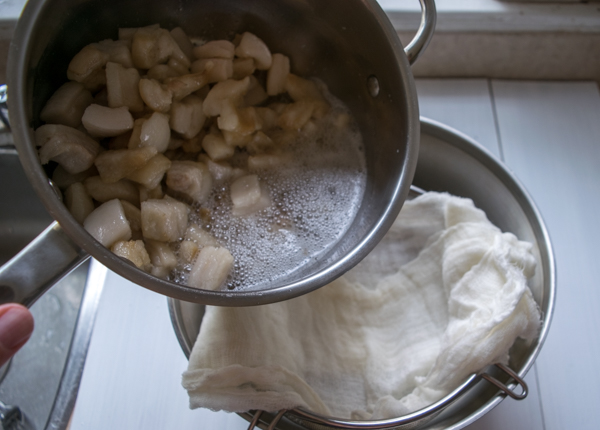 Let the rest of the fat continue to render on the stove.

For this batch I strained liquid fat out four times over 90 minutes.

Eventually the solids will reach a point where they’re not producing any more liquid: 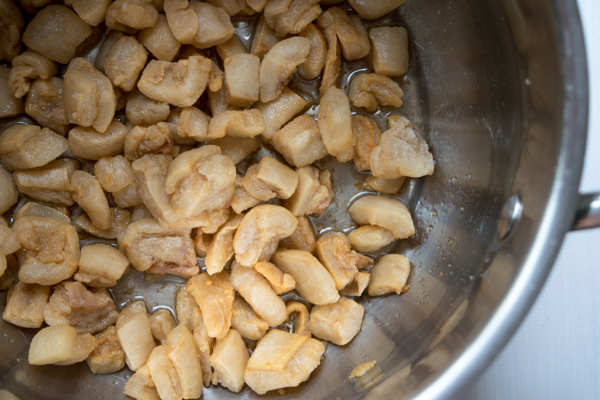 Strain off the remainder of the liquid. Here is what I have after all that; about two cups worth: 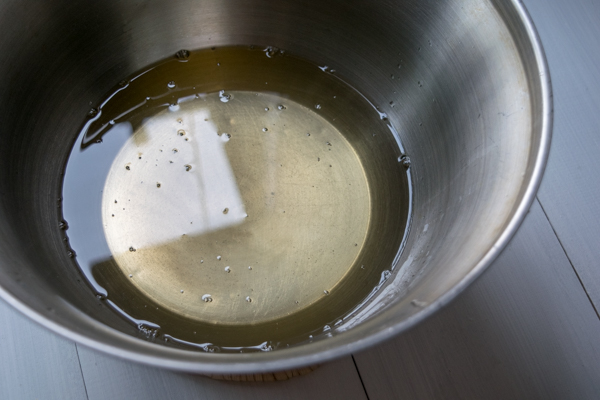 In the meantime, congratulate yourself on unknowingly making one of Latin America’s true delicacies: pork chicharones. 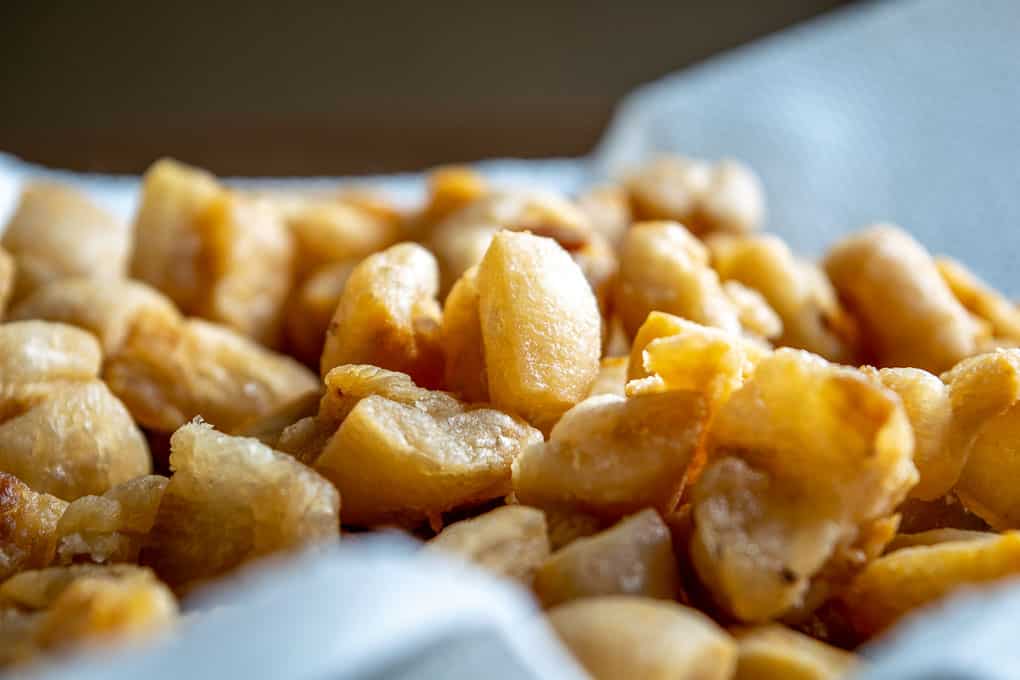 The solid bits of compressed fat left over in the pan are the chicharones.  Drain them on paper towels, add a little salt, and give ‘em a taste.

Texture will vary depending on how much skin was attached to the back fat, but most likely they will be delicious (at least for some of us).  Just be sure to put the brakes on once you start gobbling them down because they are, uhmmm, kinda fatty.

After the liquid has cooled a bit, pour it into your jar of choice. 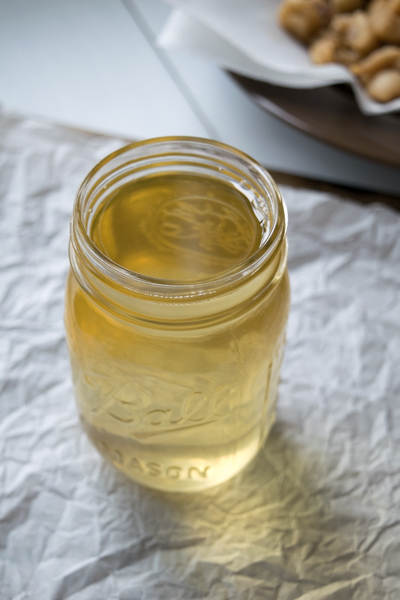 I typically use a pint-sized Mason jar to hold the lard.

This will turn opaque and solidify in a couple hours, eventually looking like this: 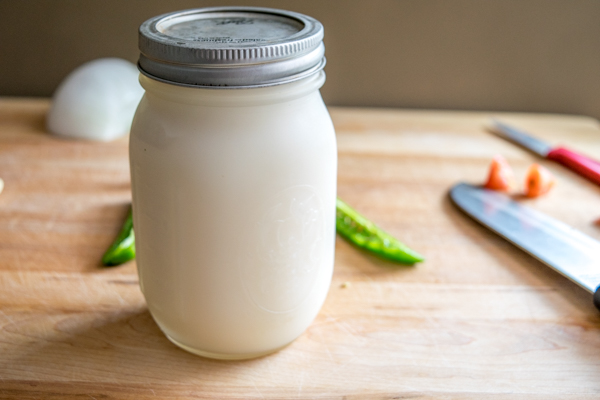 I usually put this in the fridge where it can last for months.  If you make a huge batch you can also freeze some of it.

And that’s it!  You now have two cups of one of the cleanest cooking fats you’ll ever get your hands on. Congratulations!

One last note on the world of lard...

The lard you find in the baking section of grocery stores has been hydrogenated to increase shelf life  so I usually stay away from it.  But it's worth asking your local butcher if they sell any house-rendered lard -- sometimes they do as seen in this pic from the freezer of my local meat dude:

This can be a decent middle ground if you're in a bind and need some lard on the fly, but I still recommend that peeps render their own as it's a superior product.  Plus it's kinda comforting to know exactly where your cooking fat is coming from 🙂

Okay got your home-rendered lard handy?  Now what?!

It'll give you immediate access to these authentic Mexican recipes 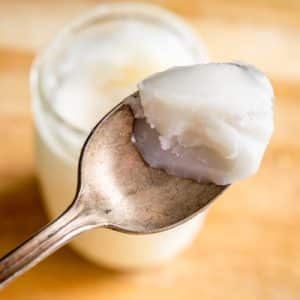 Here's some info on using bacon fat instead of lard.
Like this recipe?Click the stars above to rate it or leave a comment down below! @mexplease

« Sopa de Aguacate - Is Your Kitchen Stocked?
4 Mexican Hot Sauces You Should Know »