1417 shares
I'm re-posting these Carnitas in hopes that you'll consider them for a unique holiday meal!  They are a genuine crowd pleaser and if you start off by brining the pork you're in for a real treat -- even just an hour in the brine is a gamechanger.
And don't forget that you can get wildly creative with your epic Carnitas: burritos, bowls, taquitos, even soup! In the recipe box below I'll list ingredients for some classic Carnitas tacos with Salsa Verde, but feel free to let your Carnitas run wild! 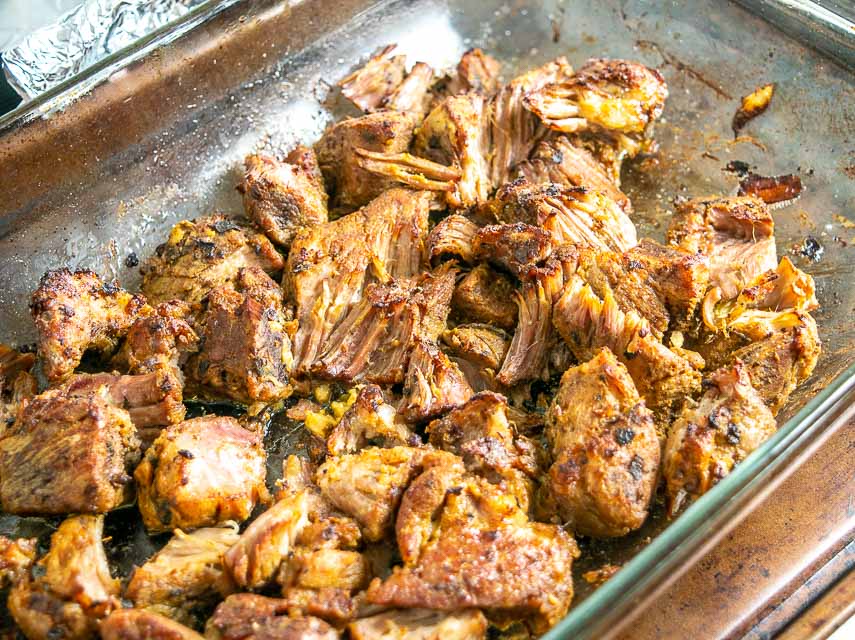 Truth be told, if you go back in time you'll find Carnitas being cooked in gobs of lard.  Yes, this helps keep the pork chunks moist during the long cooking process, but the amount of lard you need is quite cumbersome and I don't think it's a sustainable method for most peeps, including me.

So what happens if you don't brine the pork?  The chunks that don't have a lot of fat in them will dry out during the cook and taste a little bland.  When you combine it with the other fixings it's still going to be a satisfying meal, but the brine really takes it to another level so I highly recommend trying it.

Open any cookbook and you'll typically see brining times for pork in the 12-24 hour range.  So...you want me to plan for tomorrow's dinner...today?   Dream on!

But if you cut the pork shoulder into 2" chunks before submerging it in the brine then you can get away with an hour long swim in the saltwater mixture.   Yes, an hour!

As a side note, brining times in general will vary based on the density of the meat, with chicken and seafood needing far less time than denser meats.   I will sometimes brine a chicken breast for just 20 minutes and still get a massive upgrade in flavor, so in the future when you see brining times listed in a recipe just know that it's all negotiable! 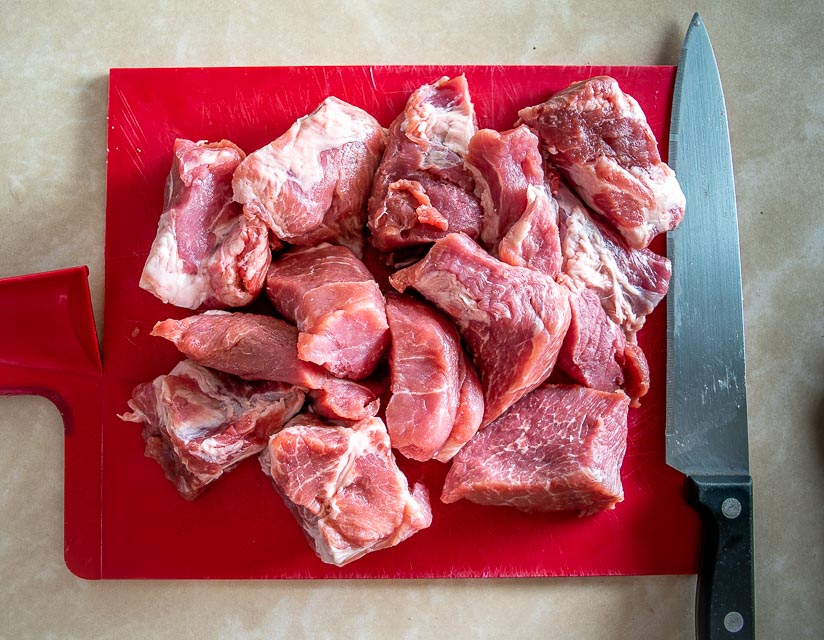 Add the pork pieces and if they aren't fully submerged you can add a bit more water. 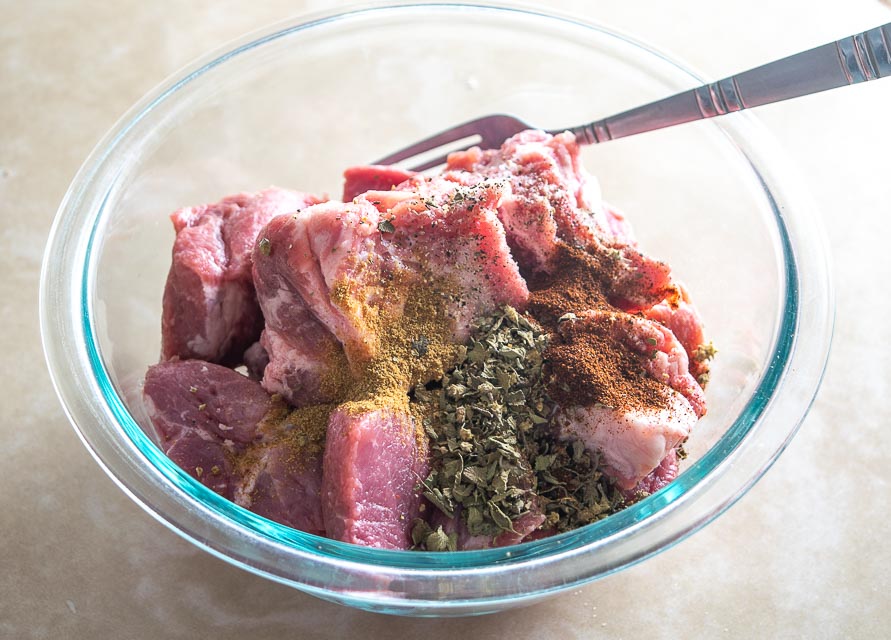 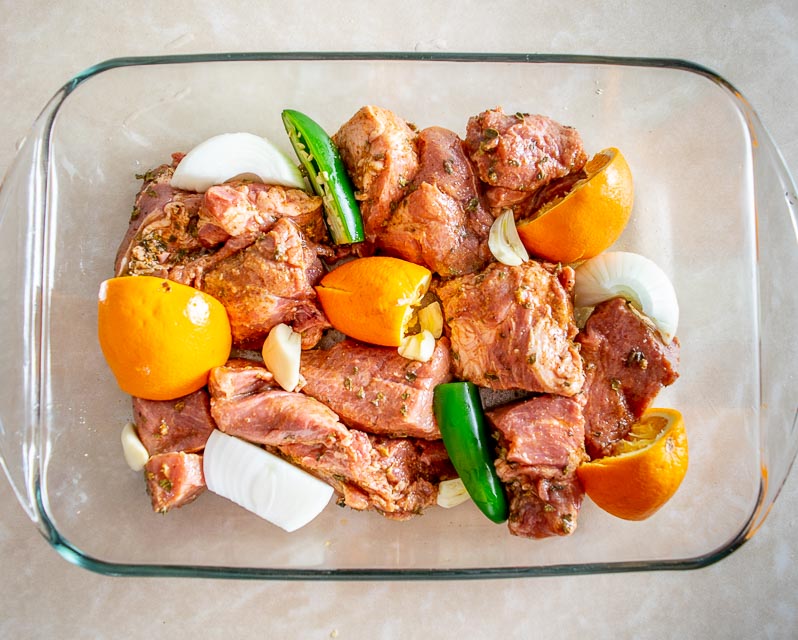 Pork shoulder responds well to low-and-slow cooking so we'll give this 3 hours in a 300F oven.  Be sure to cover tightly with foil so that it retains moisture.

Here's how this batch looked after three hours. 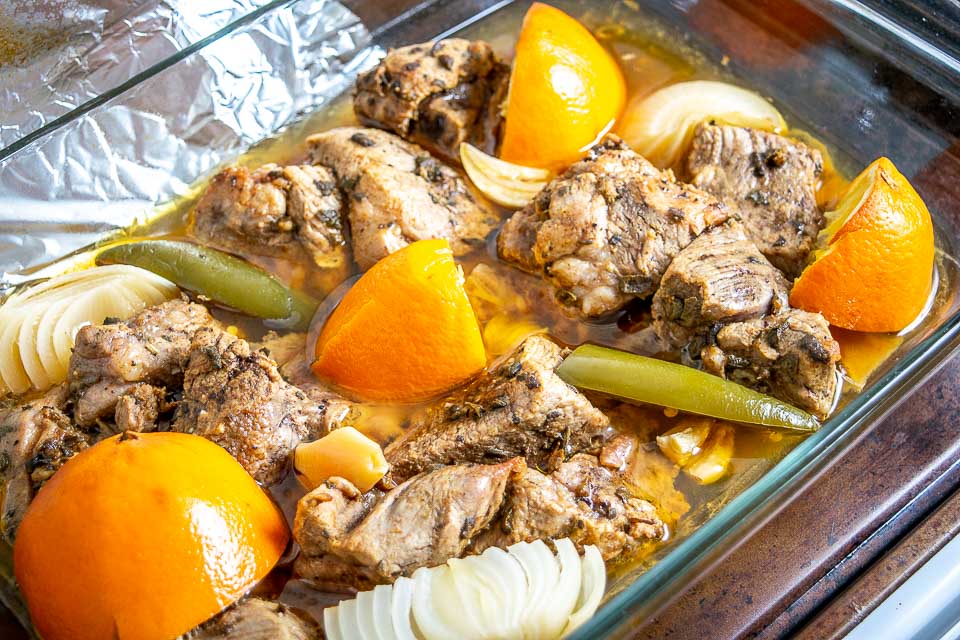 When you can stick a fork in a chunk with minimal effort then you know it's done.  If it's still firm then give it another half hour or until it's fork tender. 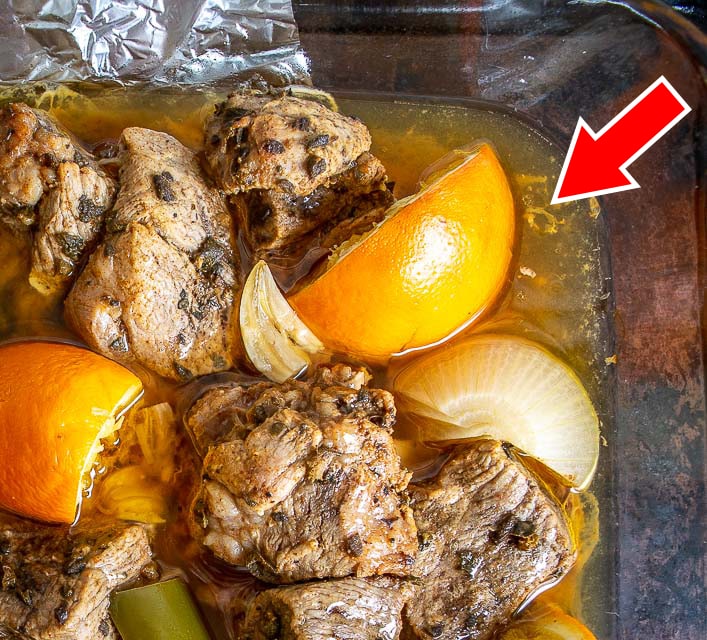 I think it's an incredibly savory flavor and could drink it up with a straw, but of course, I might be biased 🙂

This resting liquid is your secret weapon.  When you combine it with the already flavorful chunks of pork then you've got some real deal Carnitas on your hands.

I think the pork is already good enough to be eaten as is, but Carnitas will traditionally by crisped up so let's do that for this batch.

Turn the broiler on and remove the resting liquid from the pan.  When you set the resting liquid aside you'll probably notice that the fat is rising to the top.  Drizzling some of this fat onto the pork chunks will help it crisp up quicker -- and taste better! 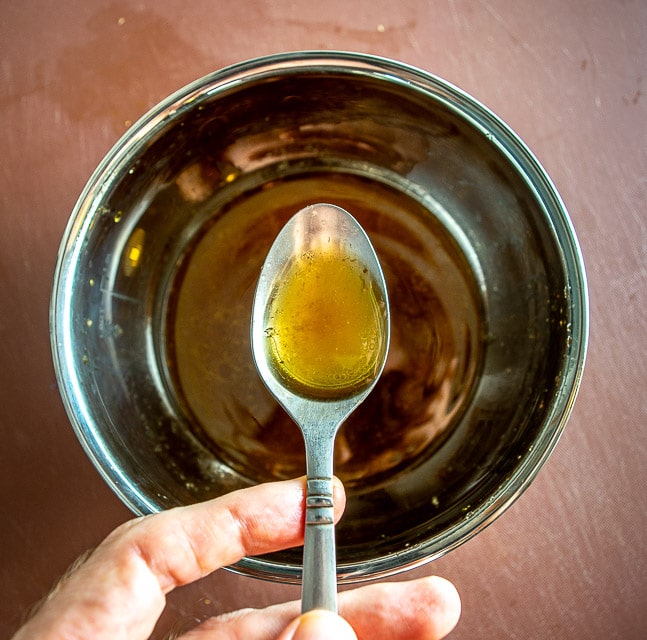 We're going to put the pork under the broiler for 5 minutes or so.  You can shred the chunks using two forks or leave them as is, your call.

So if all has gone according to plan you've got well-seasoned, savory, crispy Carnitas on your hands.  Taste good?

And don't shy away from using more of the resting liquid after you've crisped up the pork chunks.  You can always drizzle more on top before serving, with the option of discarding some of the fat that rises to the top, or even better, using it!

By the way, that resting liquid is your secret weapon if the brine time is impossible for you (what?!).   As mentioned, some of the less fatty pork chunks will come out dry if  you skip the brine, but if you shred and then toss them with the resting liquid you can rescue them.  We use that method in the hands off Slow Cooker version so it's something to keep in mind for emergencies.

If, like me, you find yourself eating the Carnitas directly from the roasting pan then that's a viable serving option!

But a more traditional route is a Carnitas tacos topped with a freshly made Salsa Verde.  This is a wicked combo to try so I'll put directions for it in the recipe box below.  All you need to do is plop some tomatillos in the oven for the last 20 minutes of the pork roasting period and blend them with: 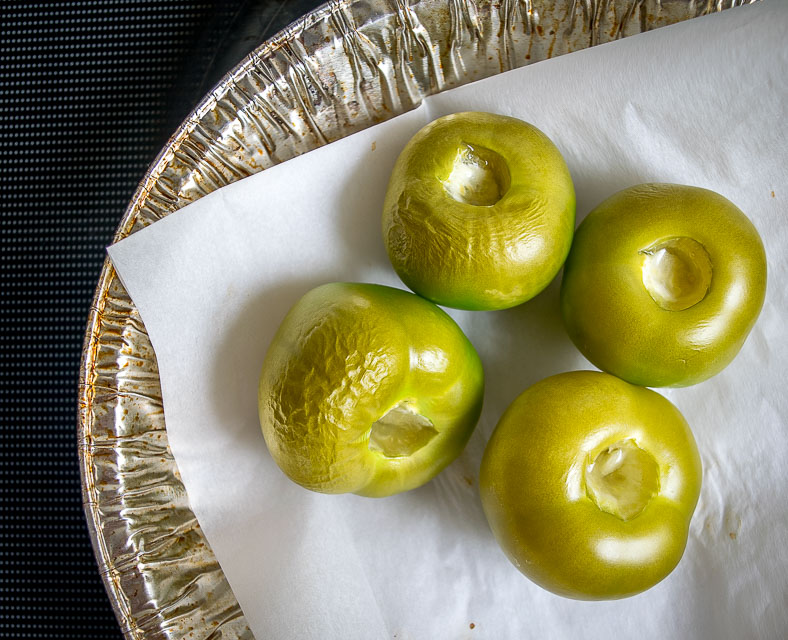 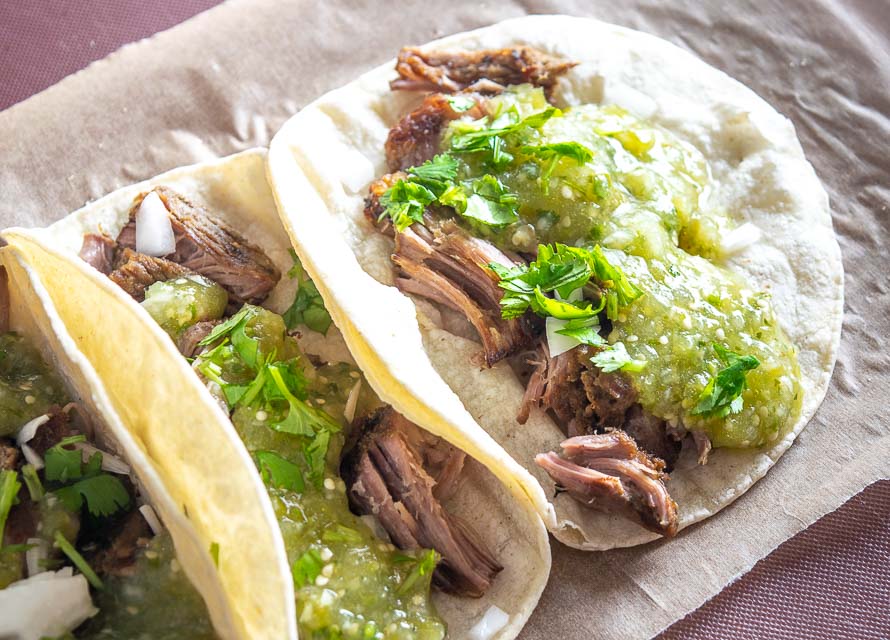 And one last thing... 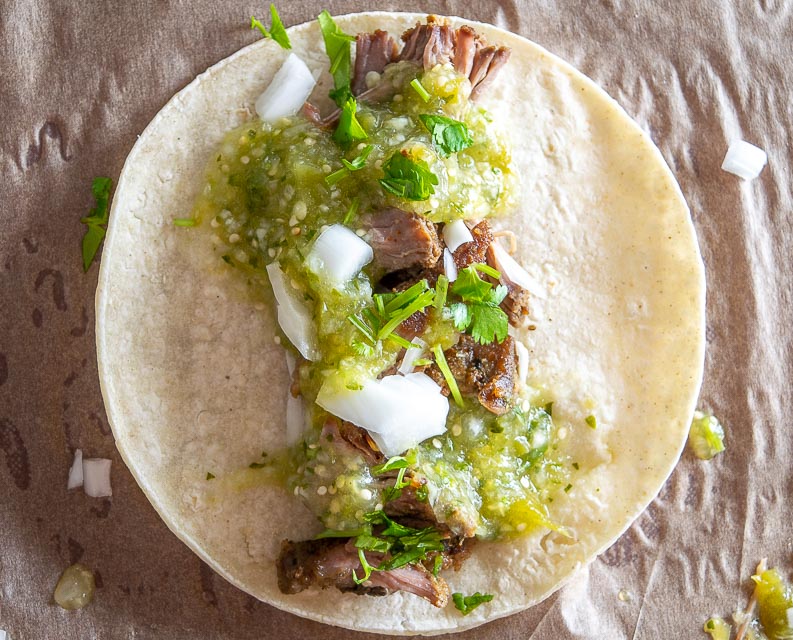 Okay, let me know if you have any questions about the brining process for these Carnitas.  It's a great technique to add to your repertoire and will offer up some instant upgrades for your next meal. 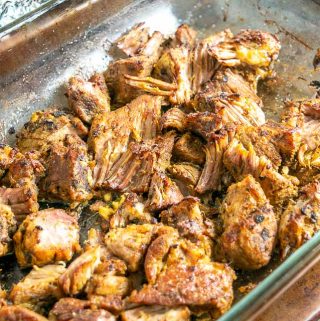 « What Can I Make with Poblano Chiles? 10 Easy Recipes
Poblano Corn Soup (Vegan) »