Lots of Picadillo eatin' over here.

If you're familiar with our Mexican Picadillo from a couple weeks ago then you can easily add this Chipotle-Cinnamon version to your kitchen repertoire.  It uses the same process, but it adds a fiery dose of Chipotle-Cinnamon flavor to create a savory, unique batch of Picadillo that just might become your new favorite. 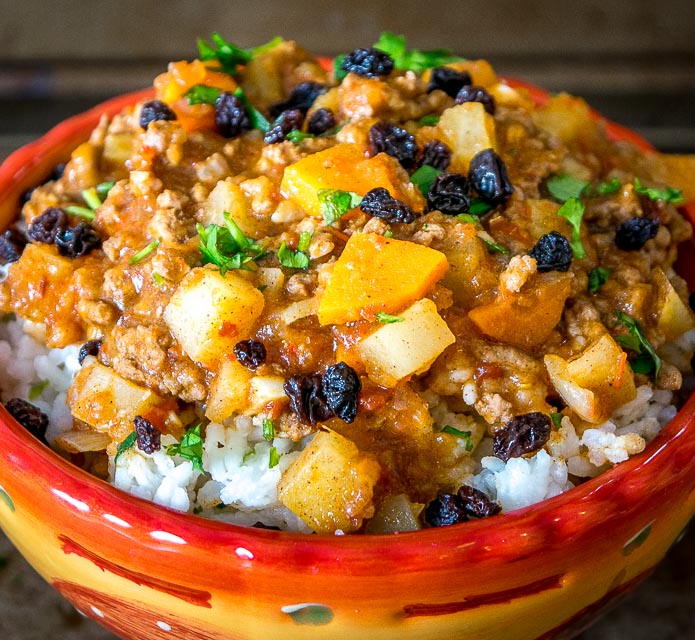 And yes, you might have spotted something else in that picture that we didn't use in our Mexican Picadillo.  I'm on the fence when it comes to raisins in Picadillo, but I wanted to try a version with some of these currants: 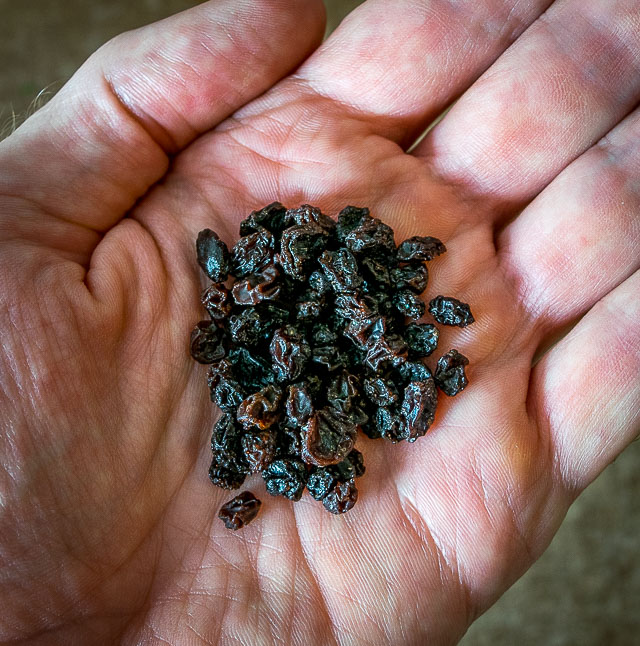 Sometimes you'll see these referred to as Zante currants.  They're a bit smaller than raisins and have a less sweet, more tart flavor, which seems ideal for those of us who don't have much of a sweet tooth.  (More info on currants).

I have to admit that they worked pretty well in this dish, but you can consider them optional.  You're going to end up with a huge batch of Picadillo if you follow this recipe, so I think it's probably best to give peeps the option of adding them in as a final garnish as opposed to including them in the simmer.

But let's not get ahead of ourselves.  It's not the final garnish that makes this dish work, it's the savory Chipotle Cinnamon combo that will make it a repeat.

We're using a similar technique here as we did in the Mexican Picadillo.  But instead of building the Picadillo using the Tomato Jalapeno Salsa, we're building it with the Tomato Chipotle Salsa.  This is an easy way to incorporate the tomatoes and heat into the dish.

Start by roasting 6 Roma tomatoes in the oven at 400F. 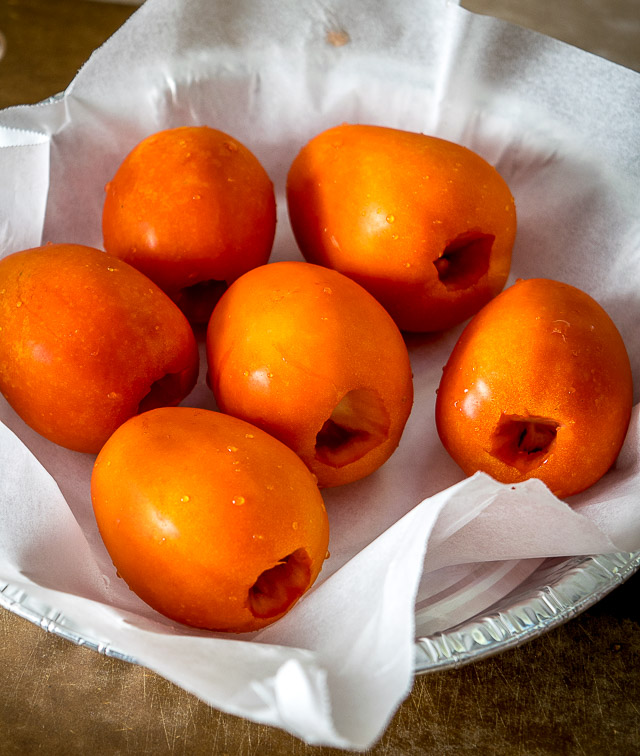 You could also pan-roast them but I usually use the oven for convenience; this will give you plenty of time to gather all the other ingredients.  The tomatoes will be roasted enough in 20-25 minutes, after which you can add them to a blender along with 3/4 onion, 2 garlic cloves, a pinch of salt, 5 chipotles, and 1 tablespoon adobo sauce. (More info on working with chipotles here.) 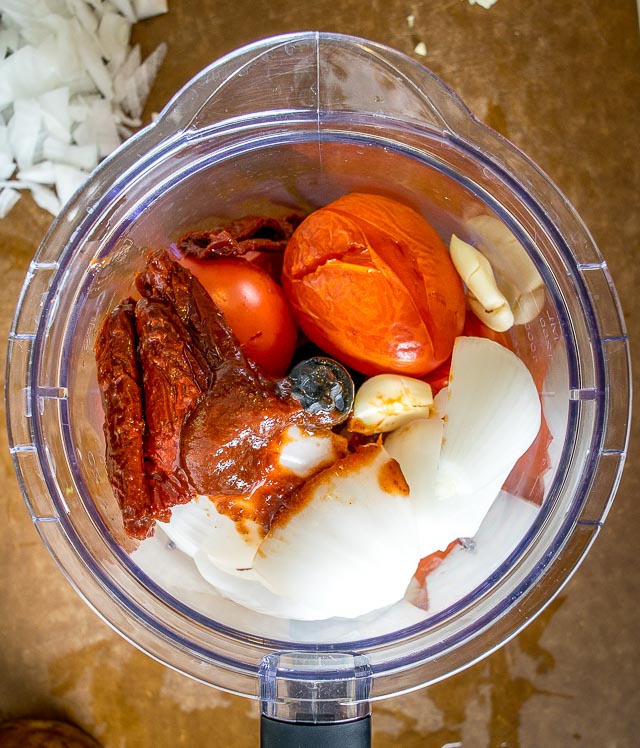 Yes, you read that right.  We are using 5 chipotles to create some fire in the picadillo, but of course if you want a milder version you can dial it back to 3-4 chipotles.  Keep in mind though that we are using 1 lb. of ground beef and an additional cup of liquid for the simmer, so the heat does get diluted down before it's done cooking.

Combine these ingredients well in a food processor or blender. 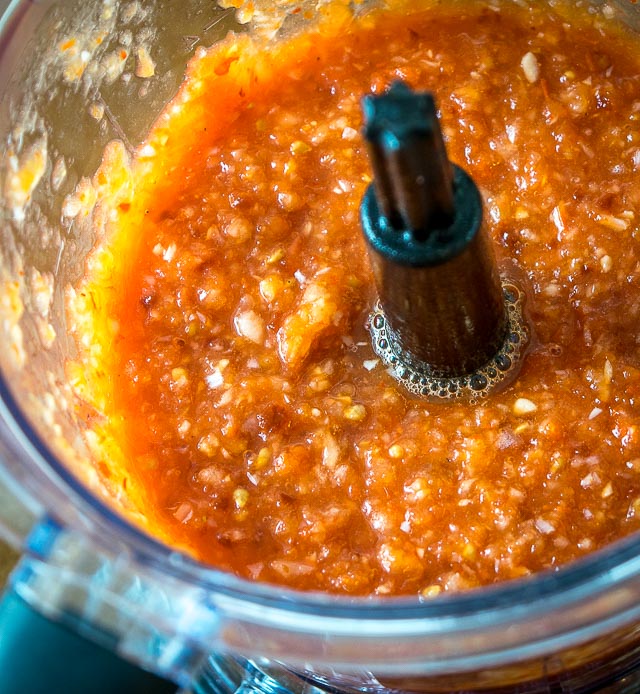 You'll end with a super fiery salsa that is almost too hot to eat.  Perfect!

And note that you essentially just made Tomato Chipotle Salsa.  If you're new to this salsa please keep it in mind for your other dishes.  It's one of my go-to recipes and easily one of the most versatile salsas to have in your kitchen.

You're also going to need a finely chopped carrot and potato for your Picadillo. 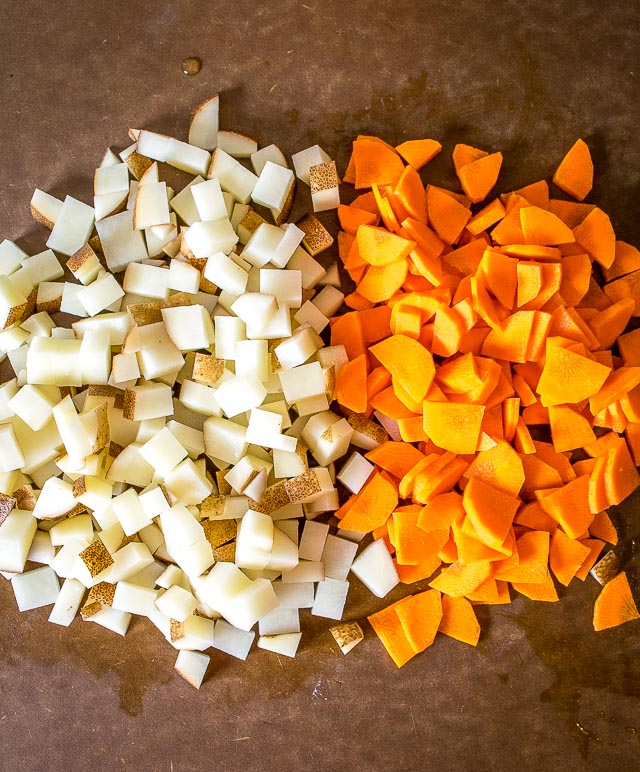 Okay, start by cooking 1/4 onion in some oil for a few minutes.  Add 2 cloves of minced garlic, saute briefly, and then add 1 lb. ground beef and 1 teaspoon of salt.  You’ll need a wide, deep skillet to hold all the picadillo. 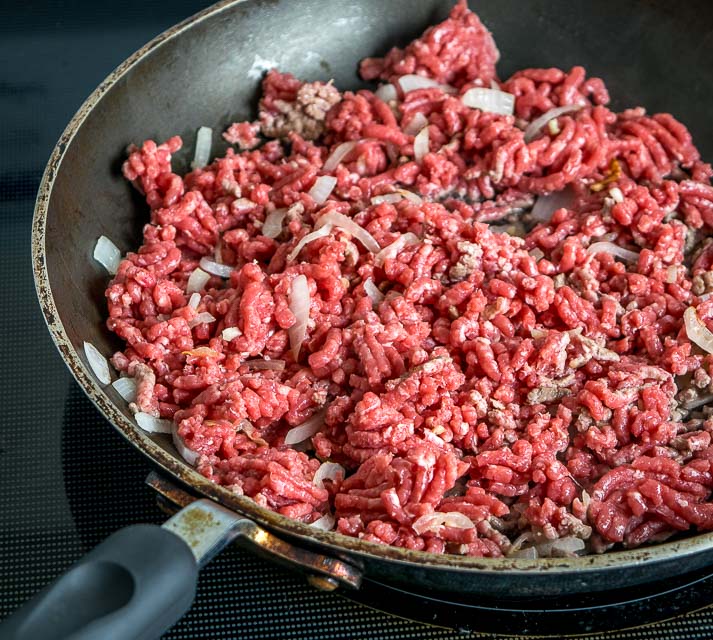 Don't worry about cooking the meat all the way through as there is an extended simmer coming up.

Once you lose most of the pink color then add the potatoes and carrots.  You can also drain off some fat at this point if you want to. 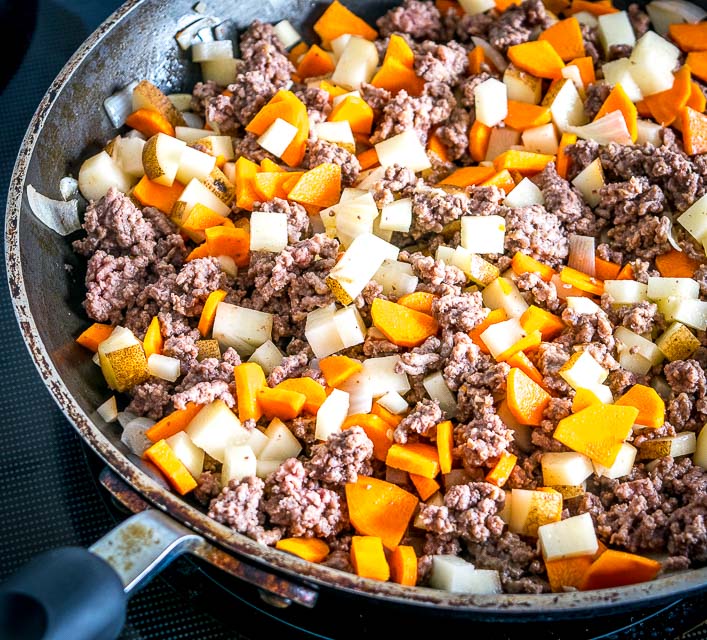 Saute briefly and then add the Tomato-Chipotle mixture along with some freshly cracked pepper and 1 teaspoon of cinnamon. 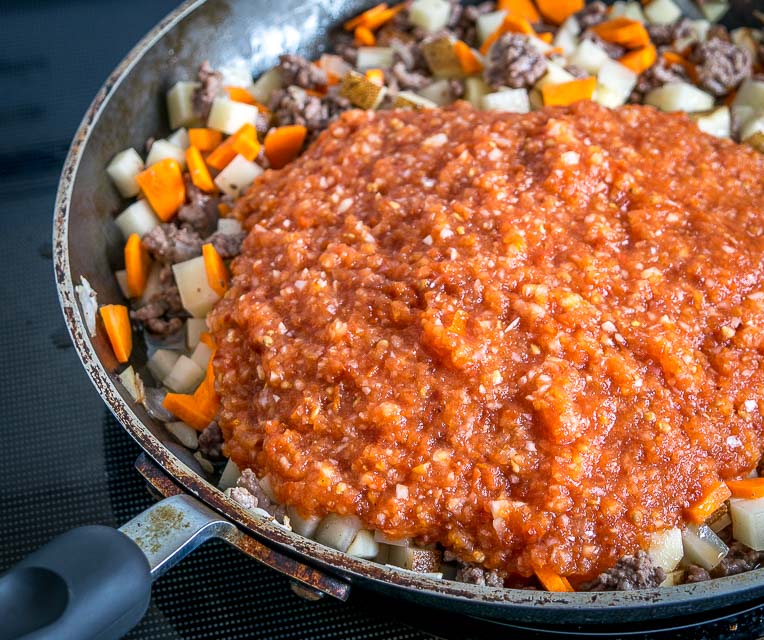 Cinnamon might not be at the top of your list to season this dish, but trust me it is a natural fit with the chipotle flavor.   Some versions of Tomato Chipotle Salsa use a pinch of cinnamon as well.

You can also add 1 cup of stock (or water) to the beef mixture.  This ensures that there is enough liquid to keep the potatoes submerged for the simmer. 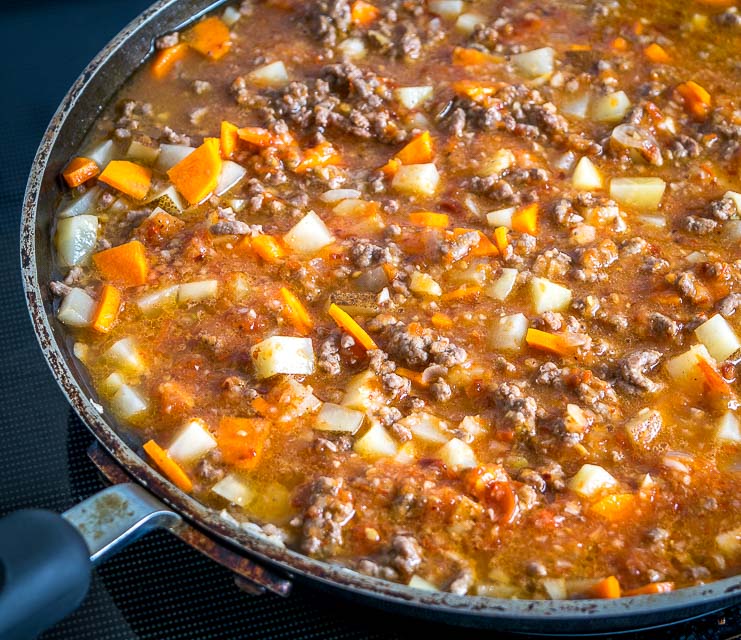 Let this simmer on medium-low heat for 20-25 minutes, or until the potatoes are cooked through. I don't have a good lid for this skillet so I just partially cover it with some foil.

I added another 1/2 teaspoon of salt to this batch and another heaping 1/2 teaspoon of cinnamon.  Sometimes the cinnamon will lose some zing during the simmer so don't hesitate to add a bit more back in.

If all went according to plan then you've fiery batch of Chipotle Cinnamon Picadillo on your hands. 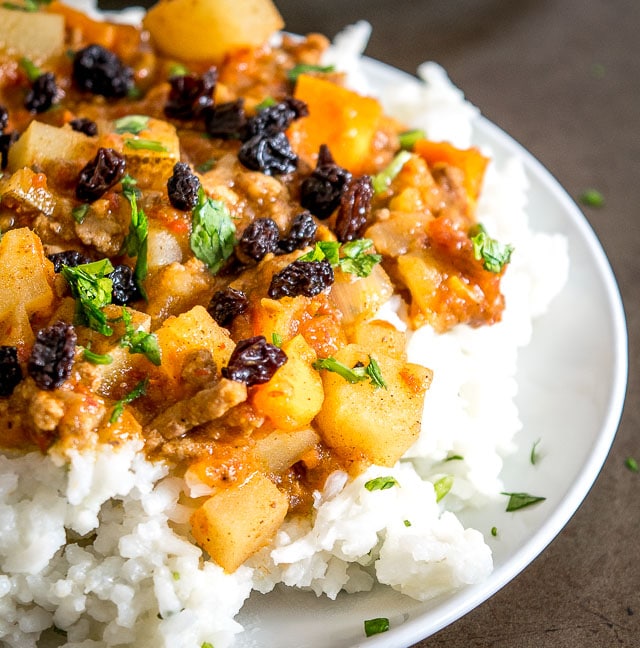 The chipotles and cinnamon create such a unique, savory flavor.  Yowsa!

As with our previous version, this Picadillo will work great in tacos and empanadas, but I keep coming back to a humble plate of freshly made Picadillo over rice.

With the option of adding some raisins or currants for a complementary burst of sweetness. 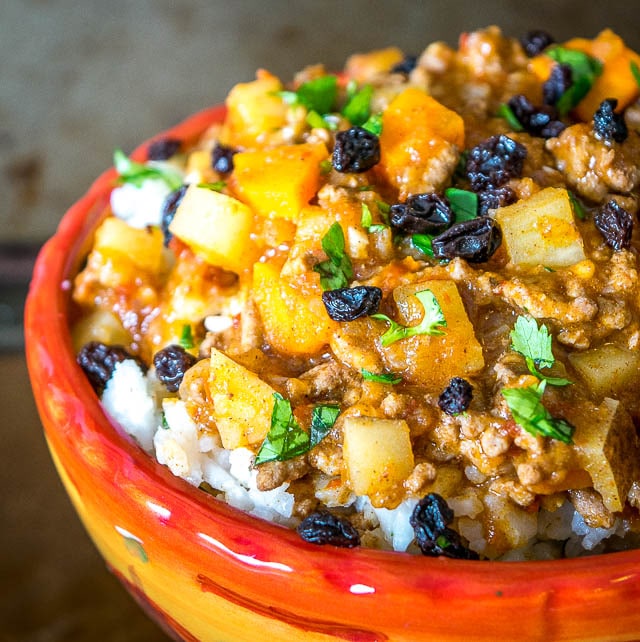 One other thing to keep in mind... 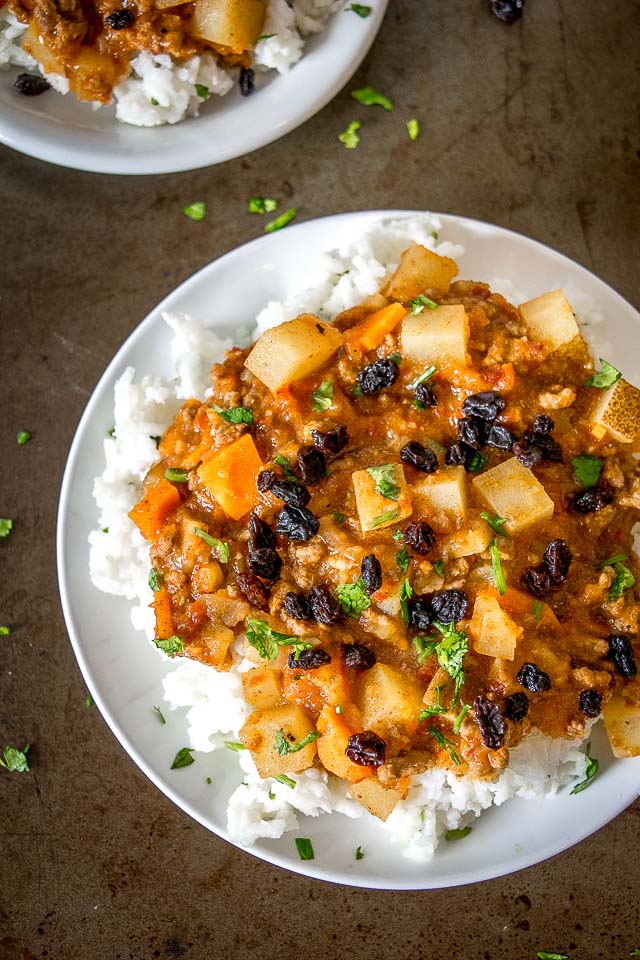 And don't forget that the best part of this recipe is opening the fridge the next day and remembering that you've got leftover Picadillo on standby.

Store leftovers in an airtight container in the fridge, where they will wait patiently for when you crawl home from work and want some home cooking without any of the cooking. 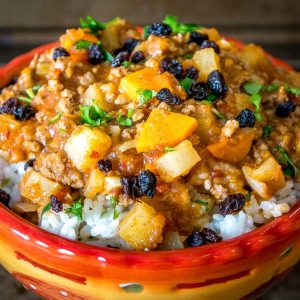 If you're familiar with our Mexican Picadillo from a couple weeks ago then you're going to love this version! It adds a fiery dose of chipotle cinnamon flavor to create a unique, savory batch of home-cooked Picadillo. So good!
5 from 1 vote
Print Pin Rate
Prep Time: 15 minutes
Cook Time: 30 minutes
Total Time: 45 minutes
Servings: 8
Calories: 189kcal
Author: Mexican Please

For the Tomato-Chipotle blender mixture:

I like having the flexibility of tweaking the flavor of this dish just before serving.  So while you will probably need close to 1.5 teaspoons of salt to season the dish properly, I only added 1 teaspoon of salt before the simmer, adding the additional 1/2 teaspoon after giving it a taste post-simmer.  Ditto on the cinnamon.  I added 1 teaspoon of cinnamon before the simmer, and then added a heaping 1/2 teaspoon of cinnamon post-simmer.    Using 5 chipotles gives this dish some real heat!  If you want a milder version you can use 3-4 chipotles.    Keep an eye out for some currants.  They seem to be less sweet and more tart compared to raisins and they are a great option for a dish like this.
Like this recipe?Click the stars above to rate it or leave a comment down below! @mexplease

We recently used our Picadillo to make a delicious skillet pot pie. 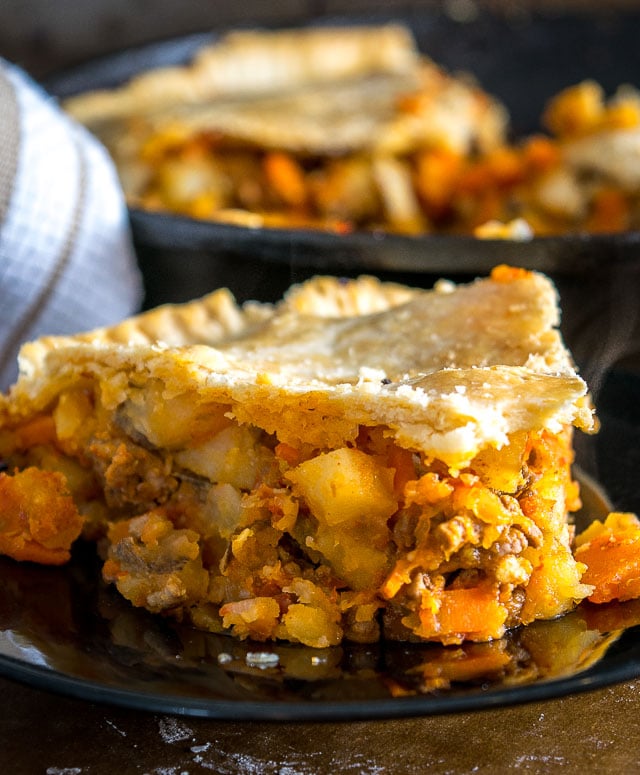