With dozens of states and municipalities caught up in the debate to legalize recreational drugs, recently a more relevant and pressing question has arisen:

Should this Valentina flavored salt be legal? Or do we need laws to protect ourselves from it? 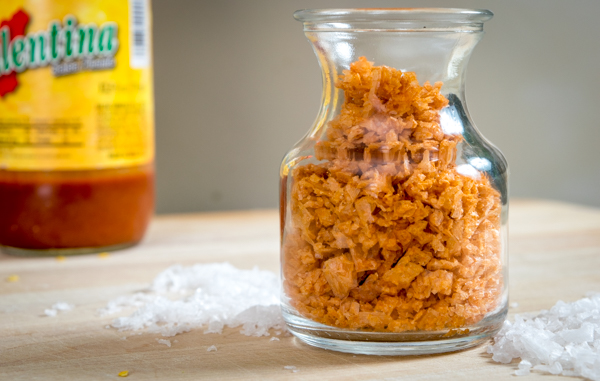 Flavored salts are an ingenious way to sneak in some extra flayva with your regular dose of seasoning.

They are surprisingly easy to make, and when combined with Mexico’s #1 hot sauce the result is a combination that can be dangerously addictive. So consider yourself warned. 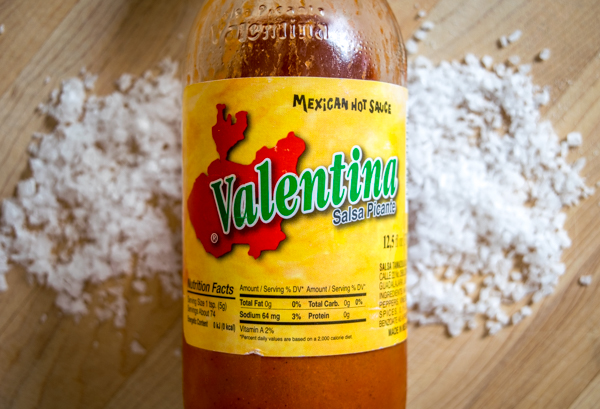 Valentina is most at home on wobbly, plastic tables in taco joints south of the border, but you're just as likely to find it in the home pantry of Mexico's top chefs.  Its sharp, tangy flavor has made it my go-to hot sauce.

If you're new to Valentina you can usually find it in specialty grocery stores and sometimes in the ethnic food aisles of major supermarkets.

It will combine best with a coarse or flaky sea salt.  You'll frequently see Maldon mentioned as a good option for making your own flavored salts. 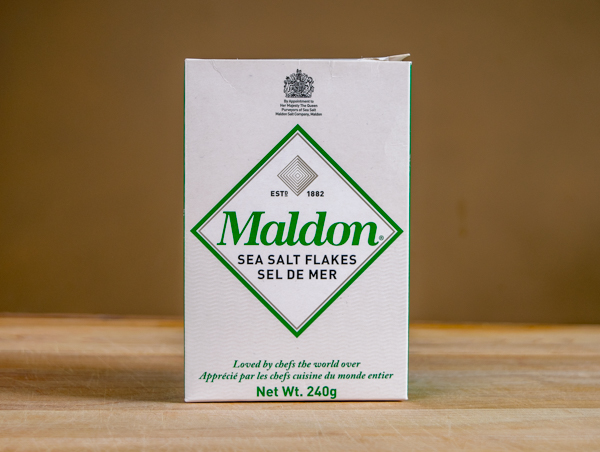 Maldon is the upper crust of the sea salt world.  It has light, pyramid shaped flakes with no additives. 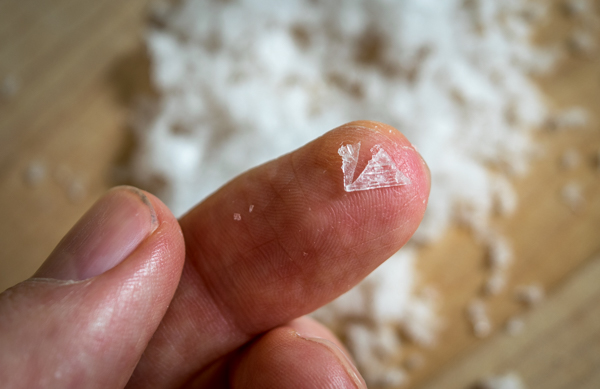 It's frequently described as a finishing salt; the final pinch of seasoning dashed onto a complete dish.  The unobtrusive flakes are potent and can create that final oomph without being overwhelming.

Of course, a traditional sea salt is a viable alternative to using the pricier Maldon, producing similar results.

Here's a look at how a traditional sea salt compares to the Maldon, with the Maldon on the left: 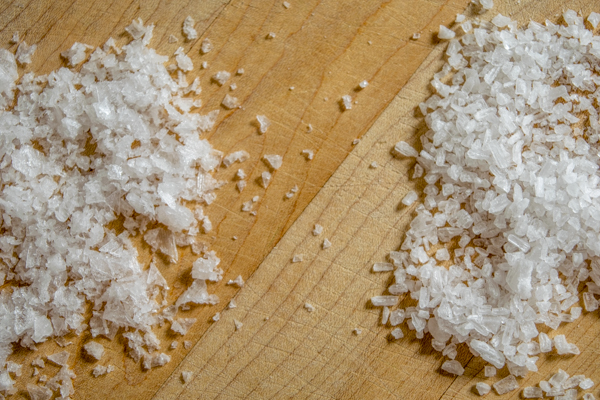 A good starting point to making your own flavored salt is 1/4 cup of salt to 1 teaspoon of flavor, so we'll start with that. 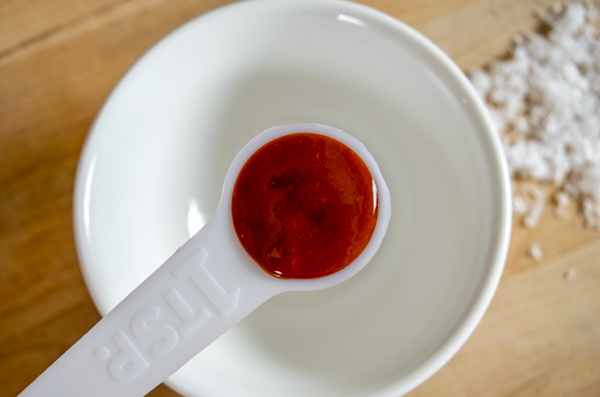 Mix 1 teaspoon of Valentina with 1/4 cup salt until evenly coated. 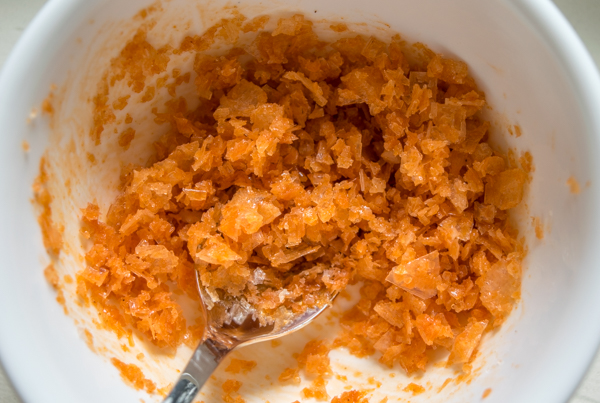 See how it is glistening?  That moisture would make for difficult storage, so it's best to let it dry out before sealing in a jar.  You can let it sit on the counter for the better part of a day, or you can dry it out in the oven.

Create an even layer of the flavored salt on a lined baking sheet. 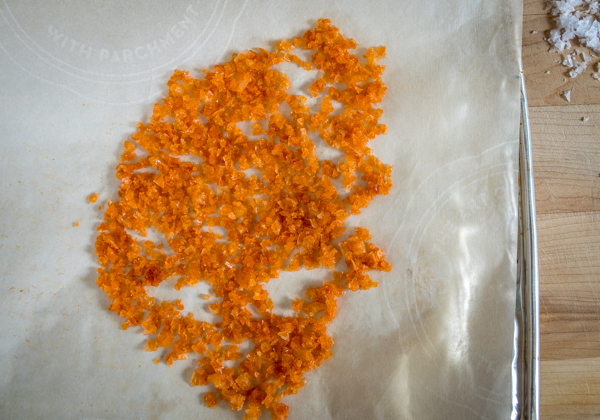 Add to the oven and turn off the heat.  It doesn't take much so we'll let the residual heat dry the salt out.  Stir once in about 10-15 minutes.

30-45 minutes later it will be dry and lighter in color. 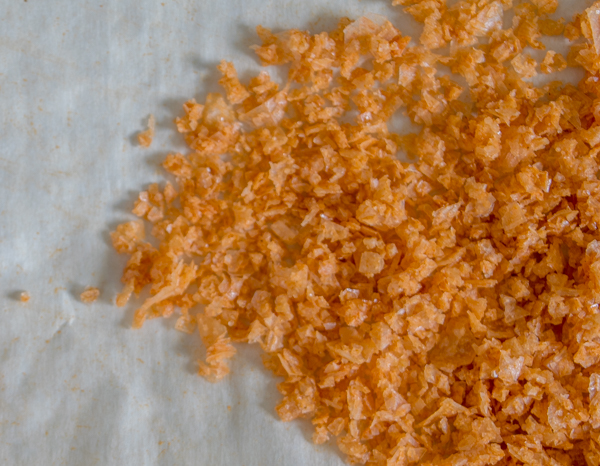 Let it cool down on the counter and then store in an airtight container. 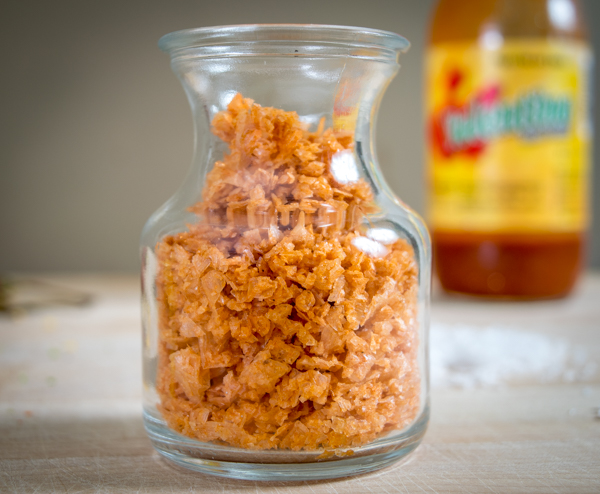 You can leave it big and flaky like this if you want to keep it as a finishing salt, or you can grind it up further using a spice grinder or food processor (or even the back of a fork). 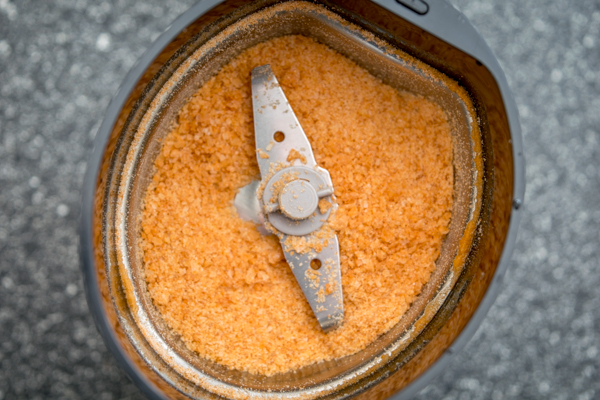 This will create a finer powder that adheres more easily to things like…popcorn!

My tolerance has built up so my latest batch has 1.5 teaspoons of Valentina per 1/4 cup of salt, so there is wiggle room on how much flavoring to use and it will mostly depend on your taste buds. 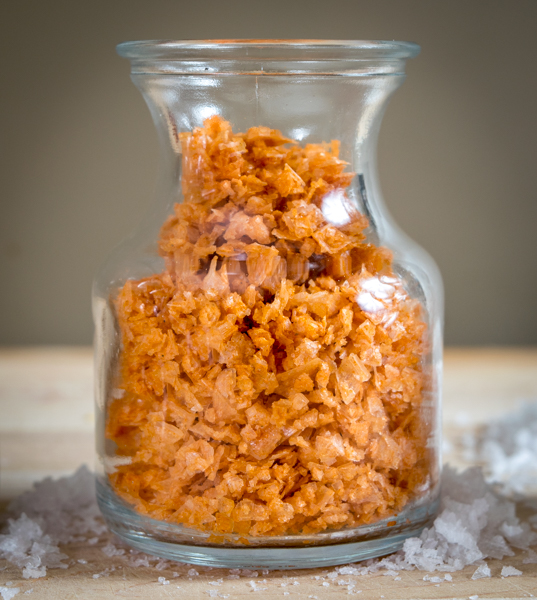 If you think this Valentina salt should be legal you can stand up for its rights by using it liberally on eggs, soups, taquitos, and french fries.

Be cautious, but proud, when using in public. 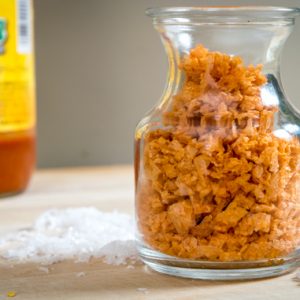 Valentina flavored salt -- Should this be legal?