This is a simple, authentic recipe for a classic Mexican Chicken Tortilla Soup.  I'm always amazed at how much flavor you can get from so few ingredients.

It's surprisingly versatile too, so once the base is in place there are all sorts of ways to customize it.

Ready to make it?

This recipe is the opposite.   When you combine roasted tomatoes, onion and garlic with some good stock then everything else becomes a bonus because the flavor is already there.  It's worth keeping this base in mind as you build your own personal version that suits your taste buds.

Start by roasting 2-3 Roma tomatoes in a 400F oven.   I used 3 smaller Romas.  In about 15-20 minutes they'll be roasted enough and will look something like this: 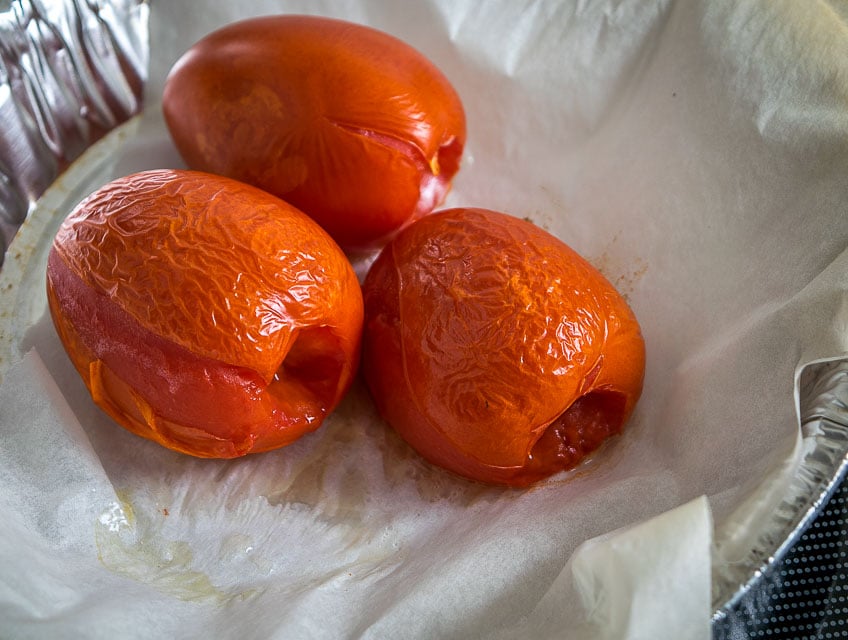 In the meantime, saute an onion and 3 cloves of garlic in some oil over medium heat. 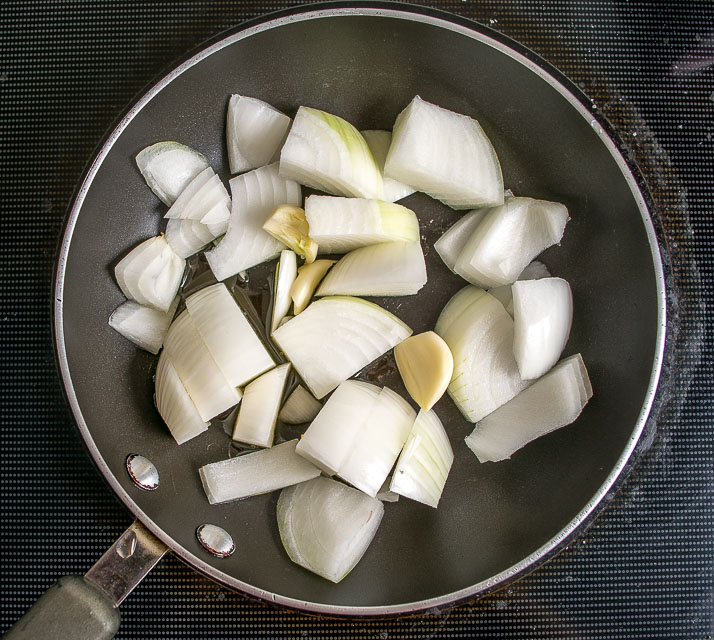 Once the onion starts to brown (approx. 7-8 minutes) then transfer the mixture to a blender or food processor along with the tomatoes and a single chipotle. 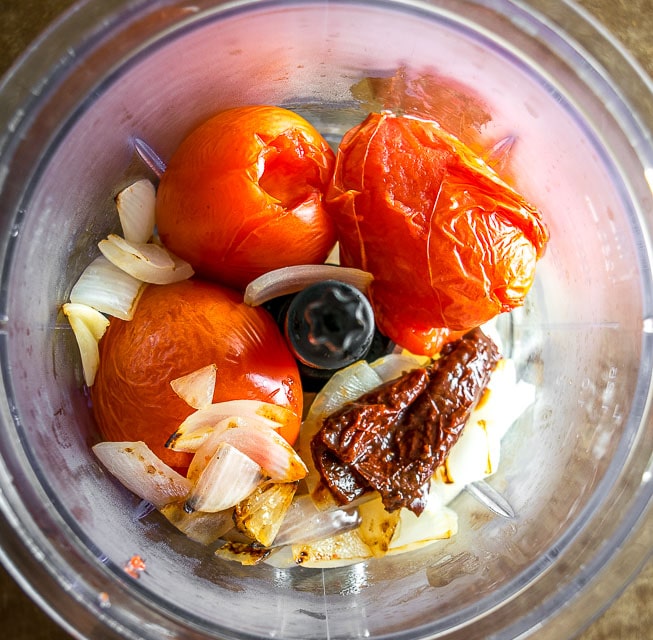 You can consider the chipotle optional.  I think the soup tastes best without too much heat, but the chipotle does add a subtle smoky flavor that I like.  You could use half of a chipotle if you want an even milder version.

Combine this mixture well and then cook it in some oil for 4-5 minutes until it reduces down a bit. 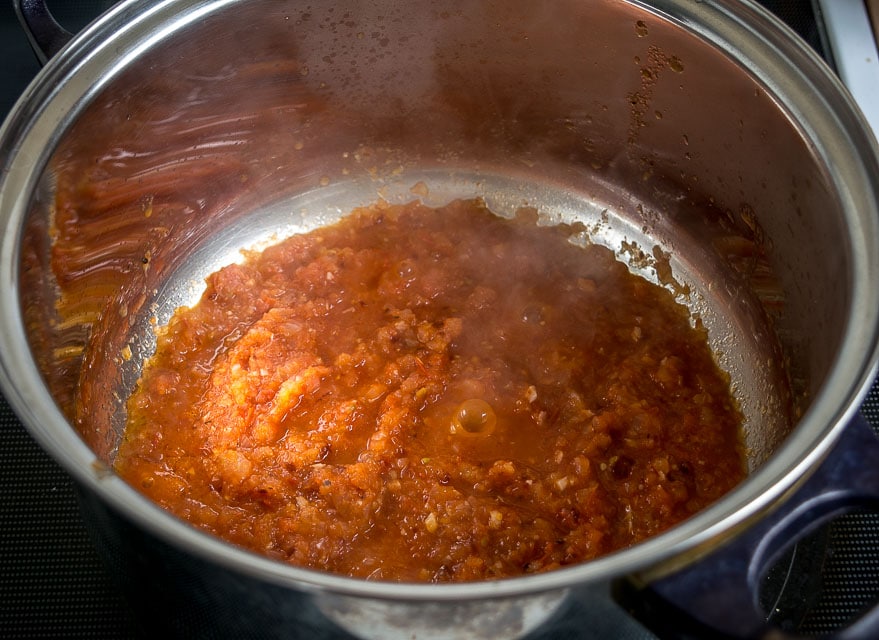 Add 2 quarts (8 cups) of the best stock you can get your hands on.  We'll also add 1/2 teaspoon of salt and some freshly cracked pepper. 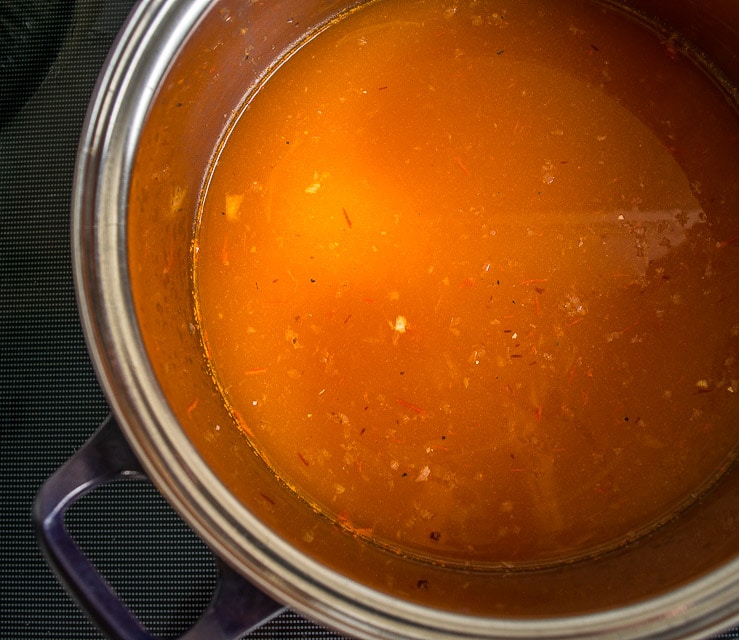 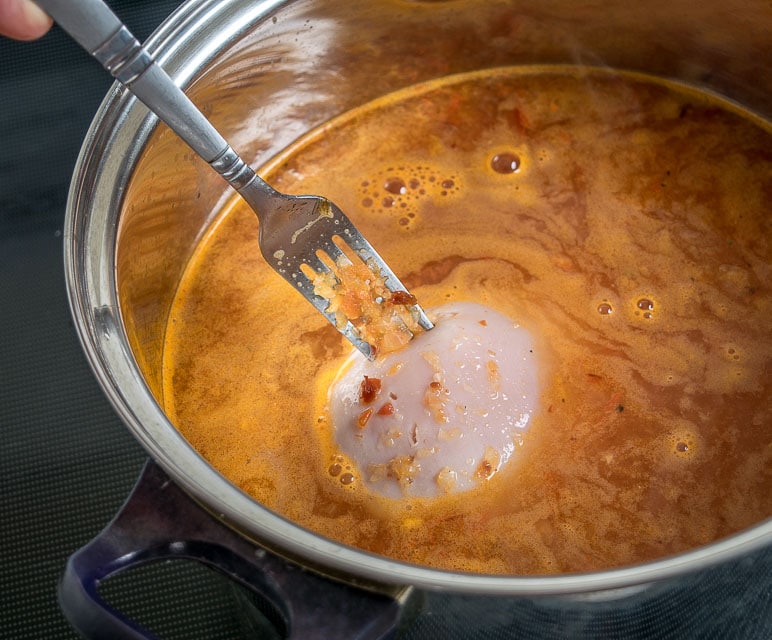 Reduce heat to a simmer and let the chicken cook in the broth until it's no longer pink in the center, approximately 15-20 minutes.

I know what you're thinking!  If we're cooking the chicken in the broth won't that kind of count as using stock?  Well, kind of.  I've done that before (using 8 cups of water) and while the results are still tasty I think you get a significant jump in quality if you simmer the chicken in stock.

(Note:  if you're not adding chicken and want a vegetarian version instead, you'll still want to simmer the soup for at least 15-20 minutes.)

As the chicken simmers in the broth you'll have time to make the tortilla strips.  Start by cutting 3-4 corn tortillas into thin strips: 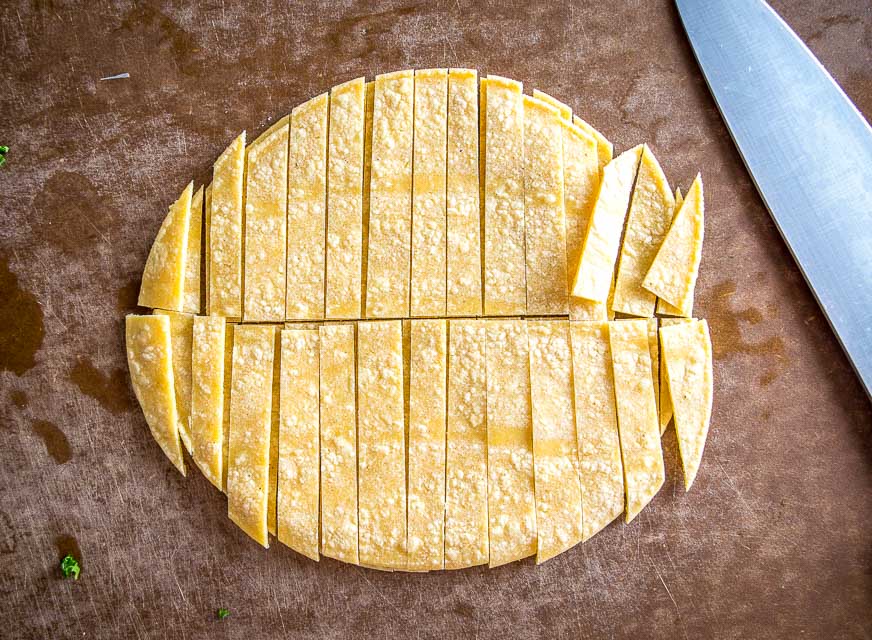 Add a thin layer of oil to a pan on medium-high heat.   I used canola oil, probably less than 1/4 cup.   We're only going to cook a handful at a time so you really don't need as much oil as you would think.

Test the heat of the oil by dropping a strip into it.  If it's already sizzling quite a bit then you are ready to go. 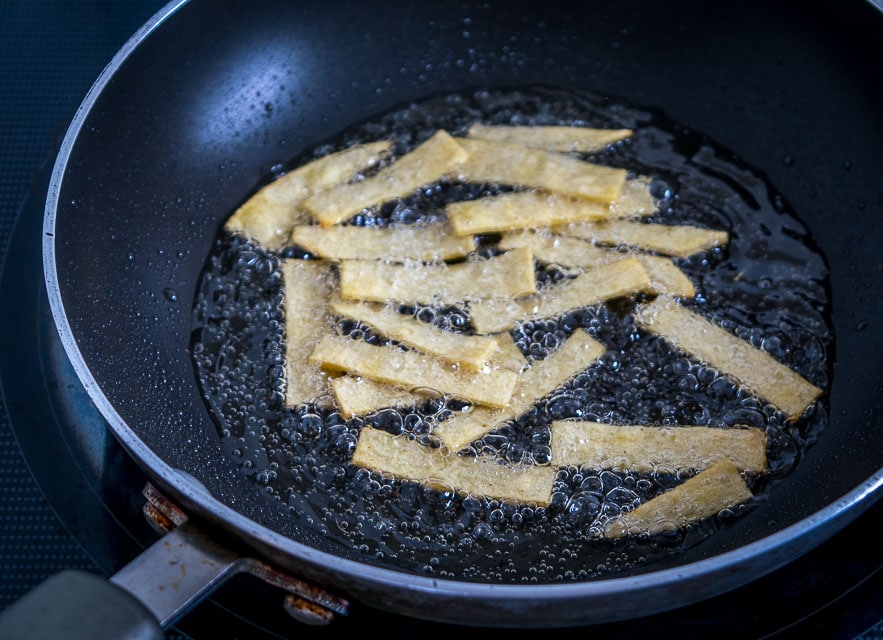 They'll bubble furiously at first.  Once they calm down (30-45 seconds) then use some tongs to remove them and set aside.

They'll continue to cook until the oil cools down, so you'll need to take them out a little earlier than you would think otherwise they'll burn. 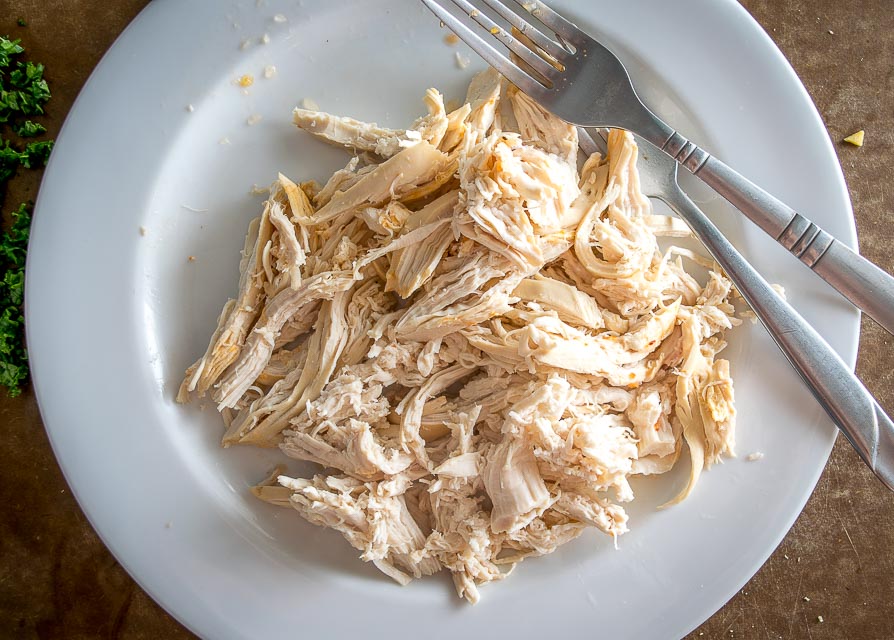 Add the chicken back to the broth and allow it to simmer for another 5 minutes or so.   You can also taste for seasoning at this point.  I added another heaping 1/4 teaspoon of salt and some freshly cracked pepper.  (So that is approximately 3/4 teaspoon salt for the whole batch but keep in mind that salt amount will depend quite a bit on the stock that you use.)

Here's what your tortilla soup will look like before adding any garnishes: 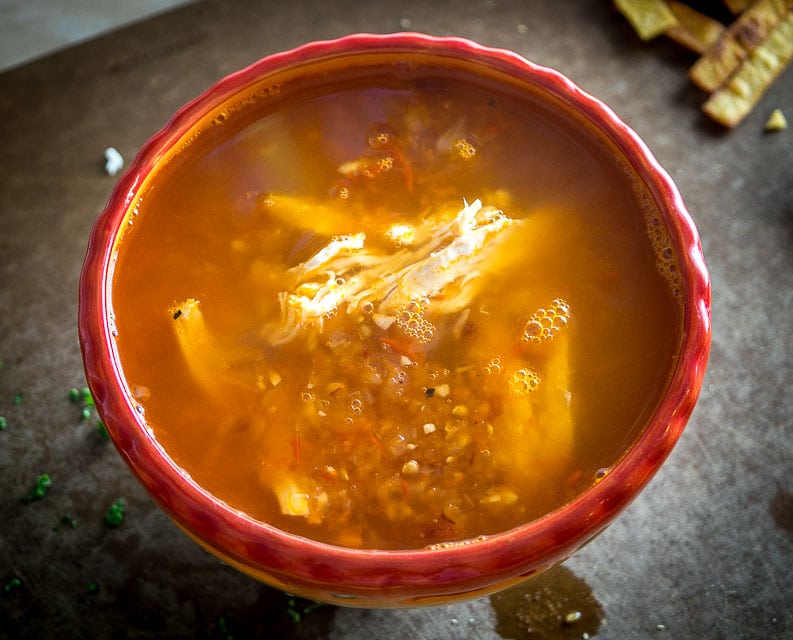 Gauging the flavor of this base will give you a good idea of how many fixings you want to add.  If I'm using a fresh batch of stock then sometimes I don't take it much farther then the above pic as it's already beyond satisfying.

I'm usually a fan of adding a final burst of acidity to soup but for some reason it doesn't seem to have the same impact on this soup.  Maybe because of the tomatoes?  Either way, you can experiment with adding a final squeeze of lime or hot sauce but it's not essential.  The base is in place and that's all you really need!

This can easily be one of your go-to recipes for soup season so it's worth giving it a try if it appeals to you.  The recipe box is below. 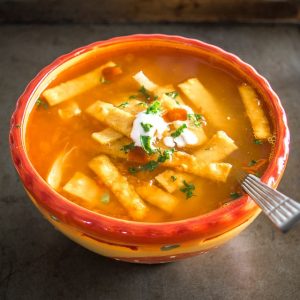