Chile Verde is a worthy ambassador for all of Mexican cuisine.  It has a comforting, otherworldly flavor that people respond to with a Yup, there it is  —  as if they are rediscovering a long lost flavor that’s been missing for a few generations.

While it’s traditionally served as a stew, the great thing about Chile Verde is that you can use it for all sorts of on-the-fly meals.  Make a bigger batch and you’ll be eating Chile Verde burritos and quesadillas for the rest of the week. 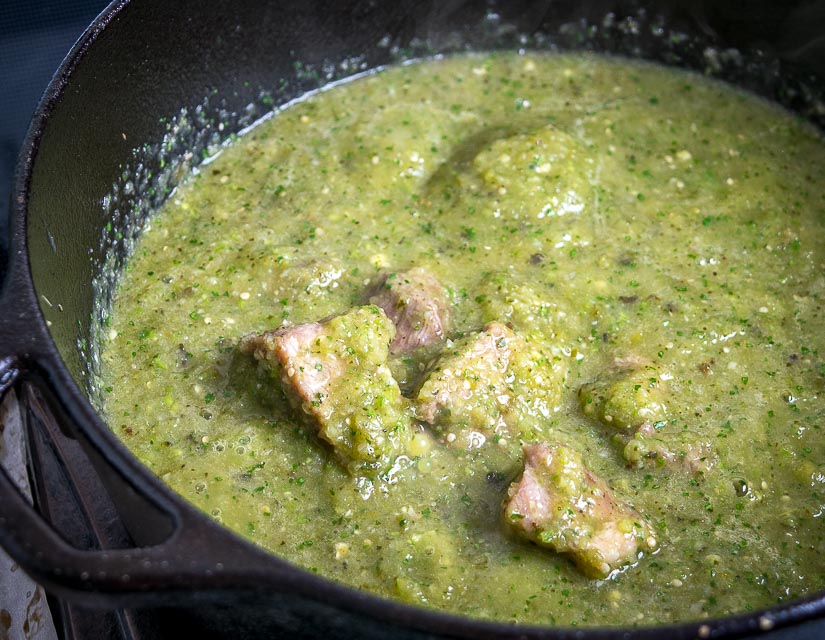 How To Make Chile Verde

Chile Verde is most commonly served with pork, but keep in mind that you’ve got some leeway on the protein choice as the luscious green sauce is by far the more important element.   I’ll put up some vegetarian and beef options at some point, but for this version we’re using pork shoulder and this is the perfect starting point if you’re new to Chile Verde.

You’ll frequently see pork shoulder sold in 2 – 2.5 lb. chunks and that’s a good size for this recipe.  It’s an inexpensive cut of meat that responds well to low-and-slow cooking.  If you give it enough time it will remind you how the phrase fork tender came into existence.

And while you’ll frequently see pork shoulder used in the slow cooker (as in our Slow Cooker Carnitas), an equally good option is a leisurely stove simmer so that’s what we’ll do for this batch.

But before you start browning the meat, it’s best to get the poblanos and tomatillos roasting as these are the key building blocks for the green sauce. 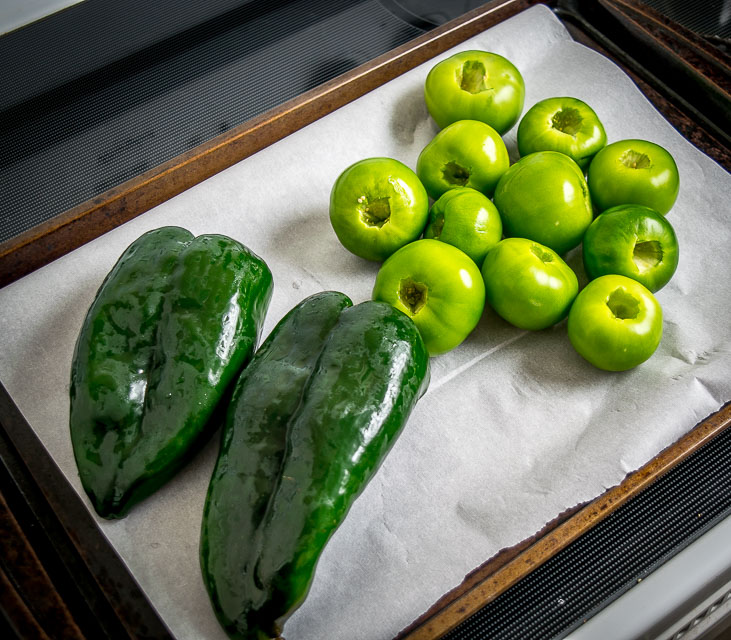 I think it’s easiest to just plop these in a 400F oven.  If you’re in a rush you can get to the finish line quicker by using the broiler, but I usually just put them in the oven and start working on the other ingredients.

I’m also in the habit of cutting out the tomatillo stems knowing that any juice leftover on the roasting pan will go into the blender as well.  And yes, you can also roast the jalapenos and onion, but as with our Salsas I tend to add those in raw.  (What is a Tomatillo?) 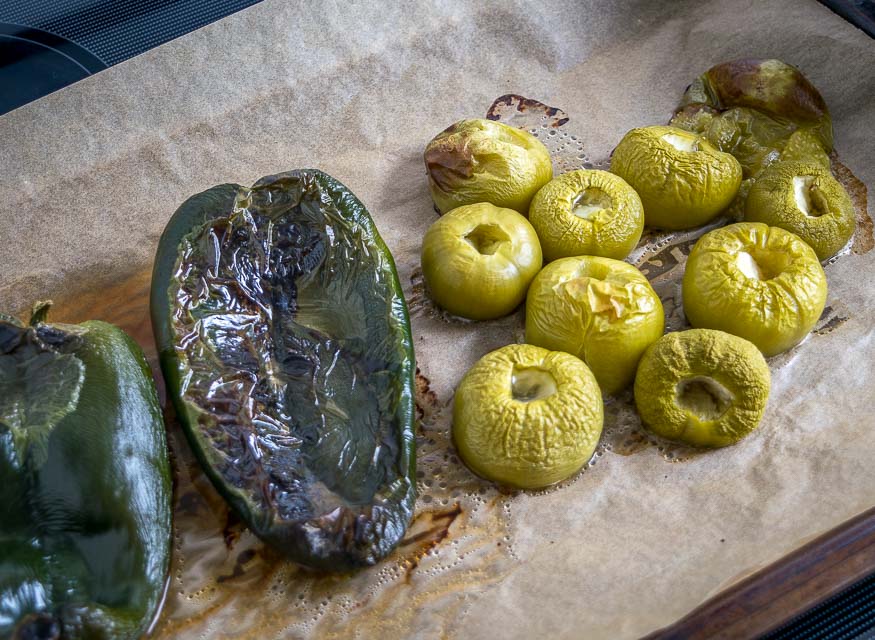 I usually flip the poblanos after 15-20 minutes, and if the tomatillos are disintegrating at that point you can take them off the roasting pan as they don’t need as much time in the oven as the poblanos. 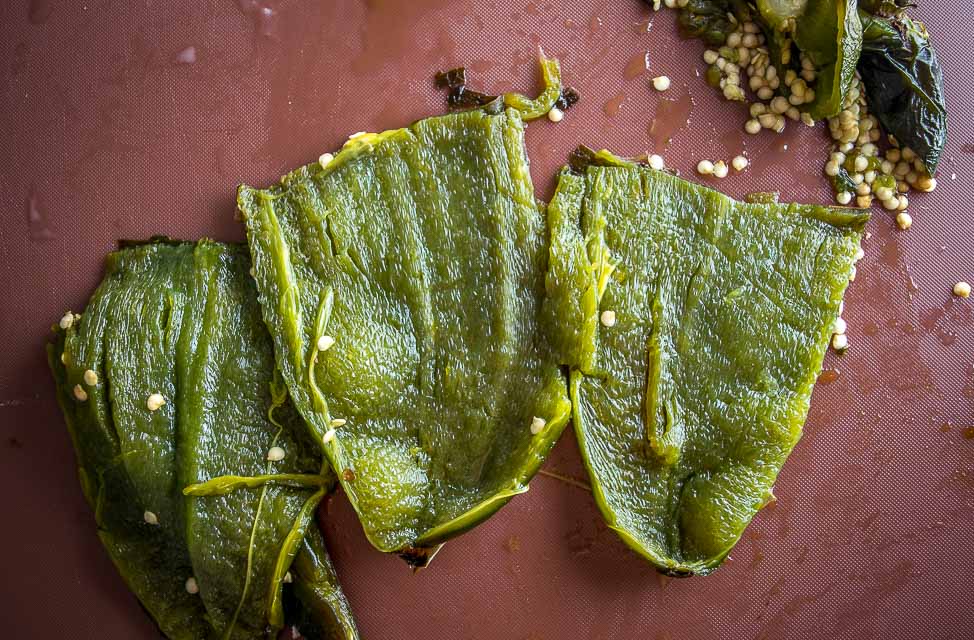 And note that you might have to blend a portion of it first to get everything to fit into a single blender, but eventually you’ll end up with a blender full of green Chile Verde goodness. 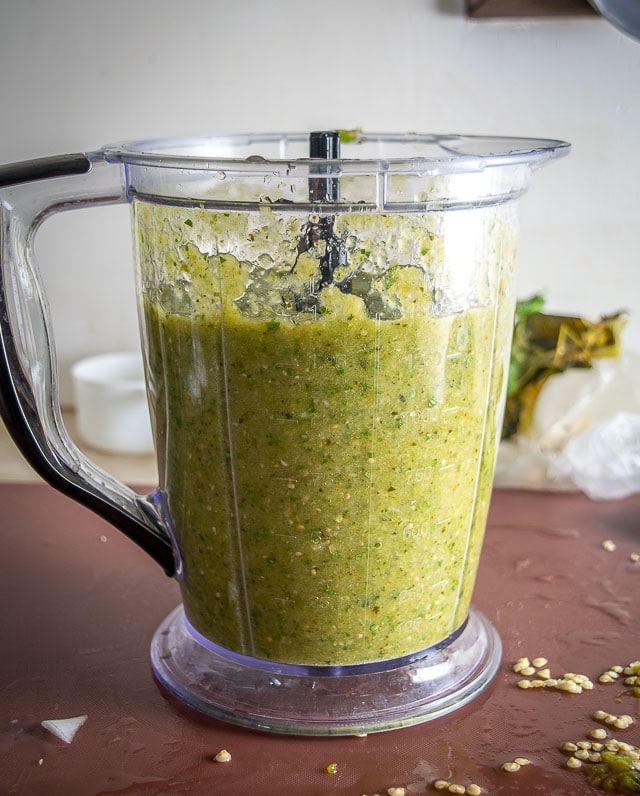 Even without any seasoning there is some serious flavor in this blender.  Give it a taste and you’ll get a quick preview of the core Chile Verde flavor!

Okay, that’s the green sauce in a nutshell and once you get the poblanos and tomatillos roasting in the oven you can start working on the pork. 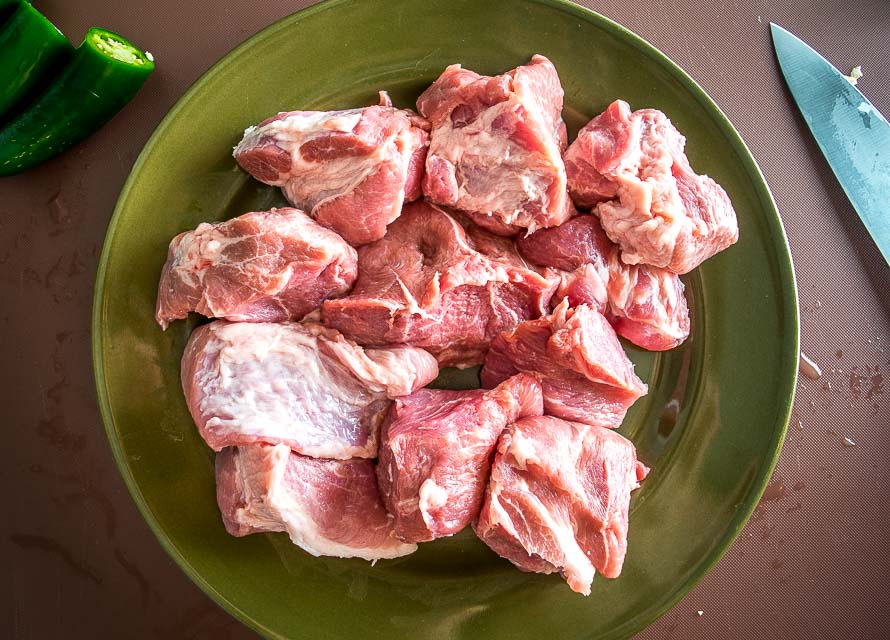 I know it’s tempting to remove most of the fat, but the chunks that simmer with some fat attached will usually be the most tender pieces!

So I cut the pork into 1.5-2″ chunks and leave plenty of the fat knowing that it can always be trimmed off after the simmer.  Season well with salt and pepper. 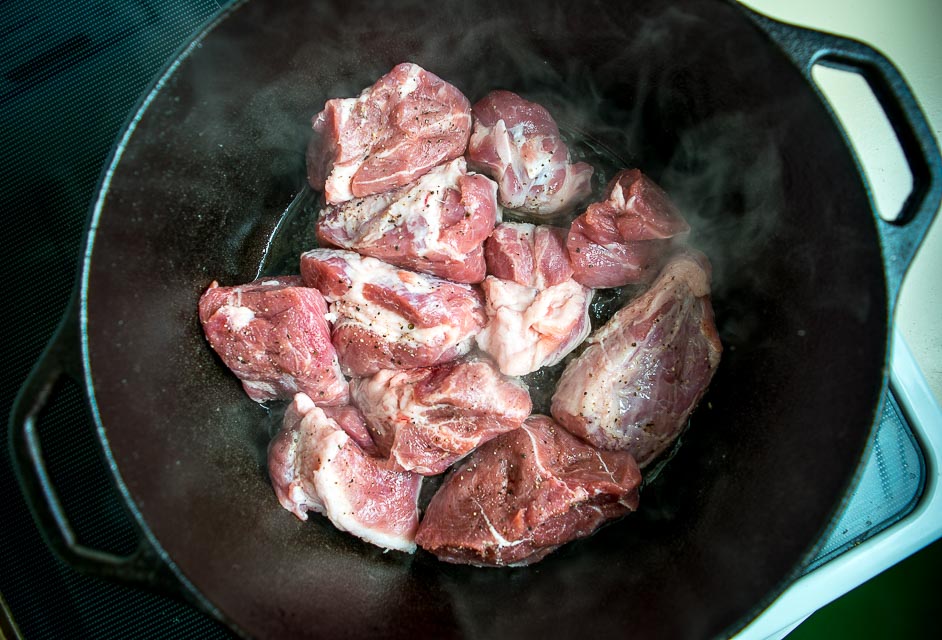 Brown both sides of the pork, approximately 3-4 minutes per side.   I find it easiest to use tongs to flip over the individual pieces.  You can do this in batches if your pan isn’t wide enough.

Once browned, you can drain off any excess fat but it will depend on the cut of meat you’re using.  I didn’t drain off any fat for this batch. 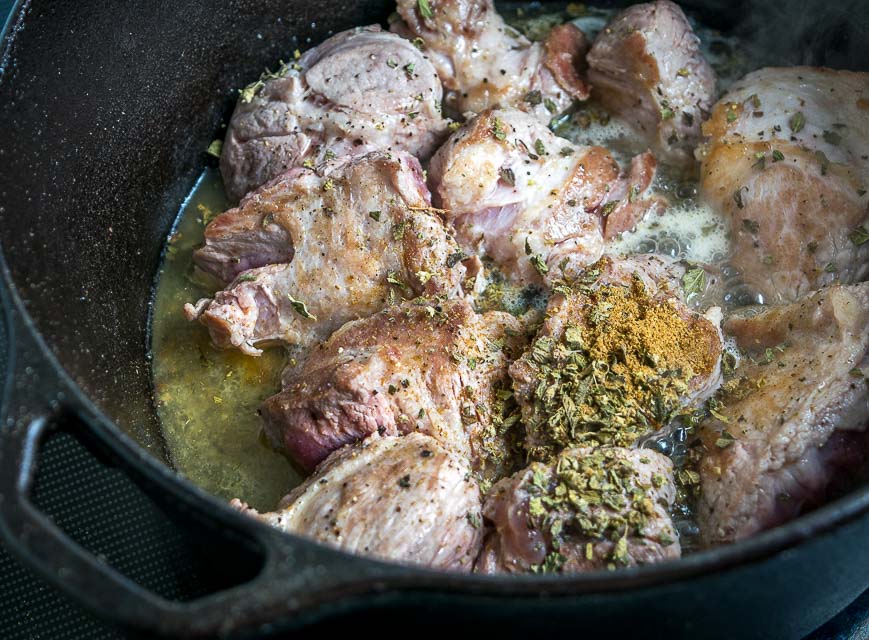 I’m a huge fan of Mexican oregano in this dish so I think it’s worth sourcing some out if you’re new to it.  It won’t make or break the dish, but I do think it complements the roasted poblano flavor quite well.  I would probably just omit it before adding regular oregano.  (What’s the Difference Between Regular and Mexican Oregano?)

The stock will quickly come to a boil and this is perfect as it will deglaze the pan.  Stir well and scrape up any bits of fond that are stuck to the pot — this will add additional flavor to the sauce. 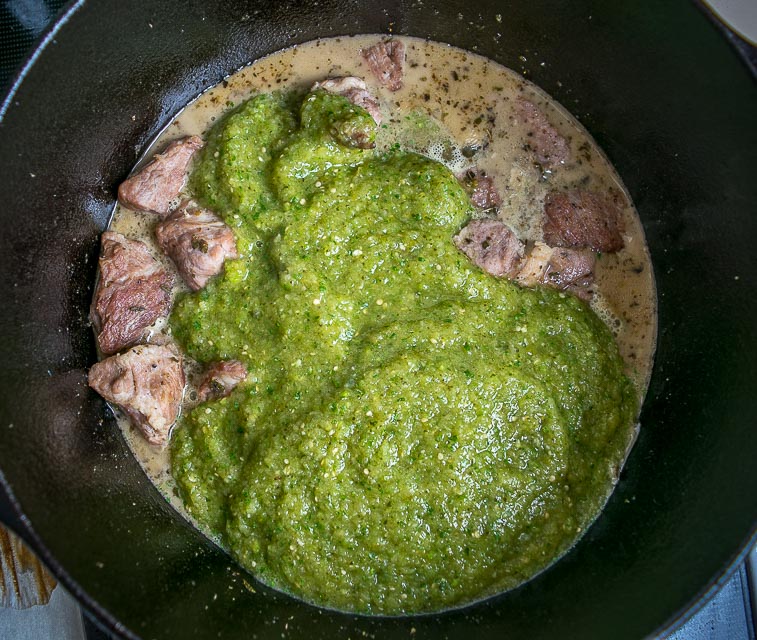 I should also mention that I make this dish extra saucy — you’ll have loads of the green sauce and the pork pieces will be having a comfortable adult swim as they simmer away.

Here’s what this batch looked like after simmering away for two hours: 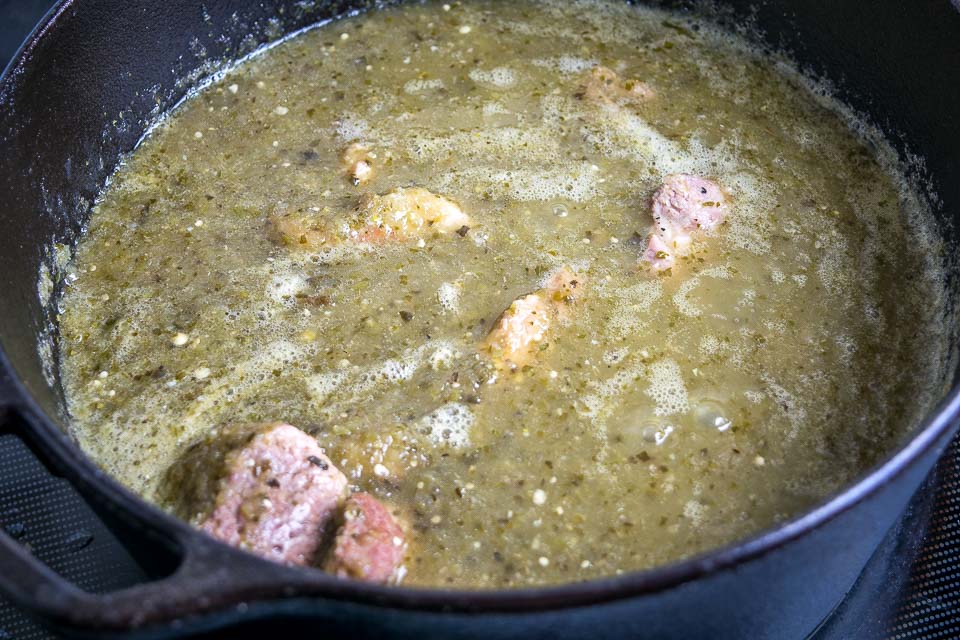 I usually start checking the pork for tenderness after two hours.  It’s done when it nearly pulls apart on its own. 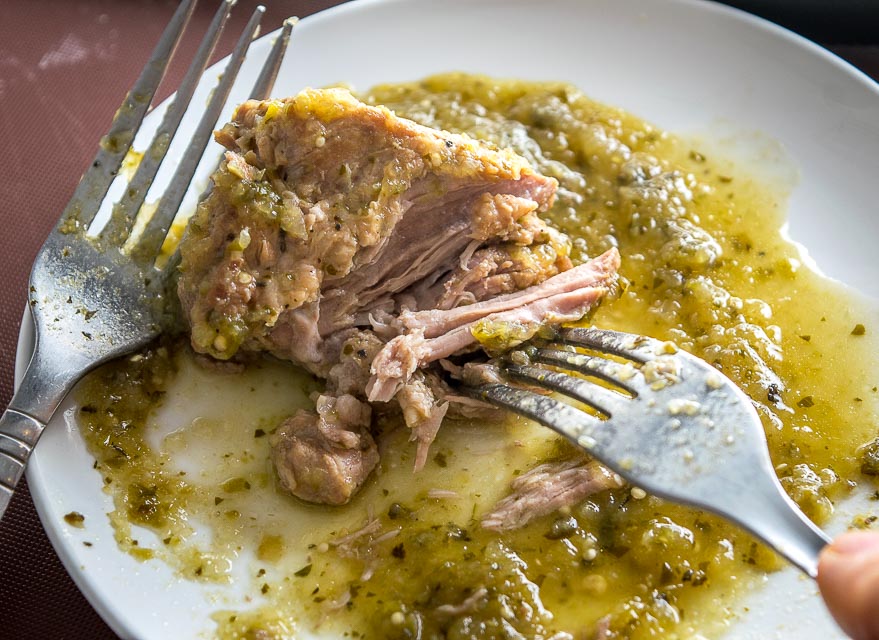 If it’s still tough then give it some more time on the stove.  The heat will eventually break down the fatty connective strands and give you some tender, moist pieces.  This batch simmered for about 2 1/2 hours.

Once you’re happy with the tenderness of the pork then it’s time to take a final taste for seasoning!  I added generous pinches of salt and Mexican oregano at this point, but keep in mind that this will depend on which stock you’re using. 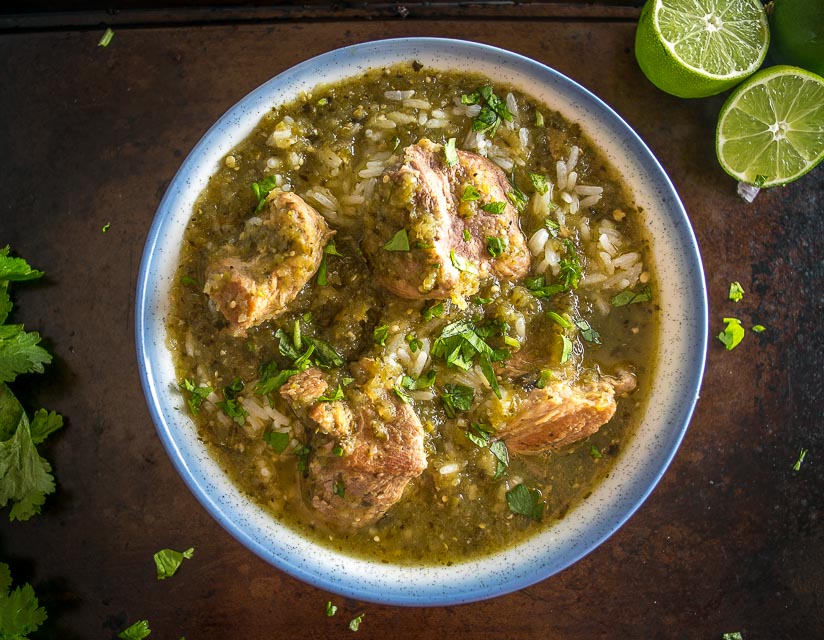 If it’s your first time making Chile Verde I recommend serving it over some white rice to see how your palate reacts.  The sauce has so much flavor that you really don’t need much else and I eat it like this quite often. 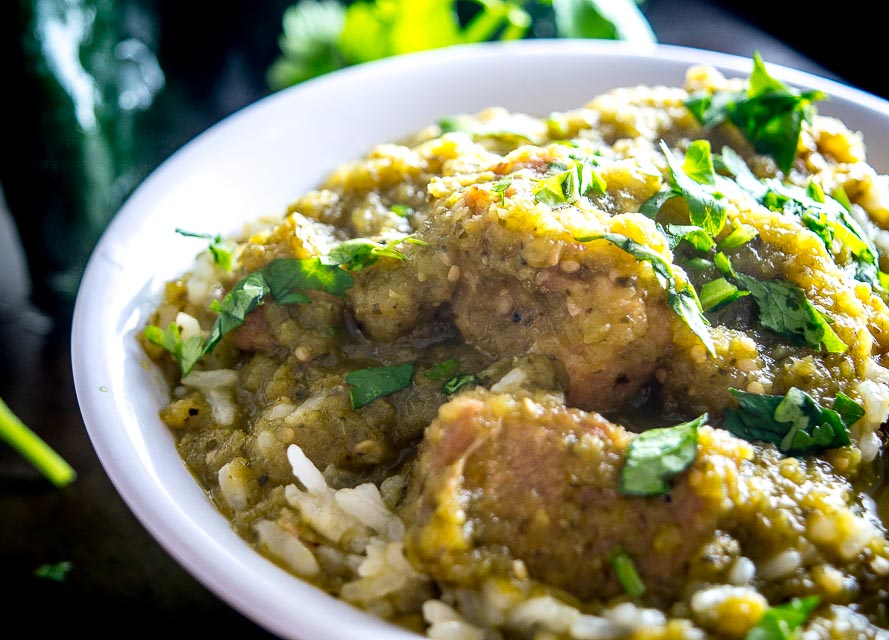 Chile Verde is such a great dish to add to your repertoire so I hope it treats you well.   Feel free to use the comments section below if you have any questions about it.  Once you’re comfortable making the sauce I think you’ll find all sorts of ways to use it. 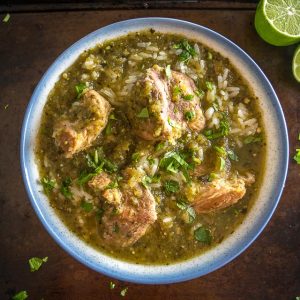 You'll frequently see pork shoulder referred to as pork butt.  I usually use the oven to roast the poblanos and tomatillos, but using the broiler is faster if you are pressed for time. I used homemade chicken stock for this batch.  I usually start testing the pork after 2 hours.   When it's fork tender and nearly pulls apart on its own then it's ready.  If it's still tough or dry then it needs more time on the stove.   Pork shoulder is a forgiving cut of meat so don't worry about overcooking it.  This recipe makes tons of green sauce so be sure to serve up lots of it in each bowl, that's the key to Chile Verde! Here's a vegetarian Rice and Beans Chile Verde.
Like this recipe?Click the stars above to rate it or leave a comment down below! @mexplease 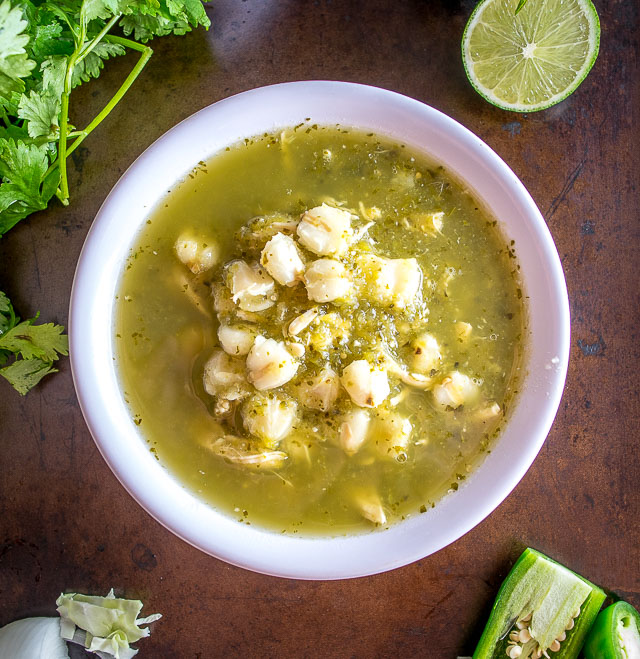 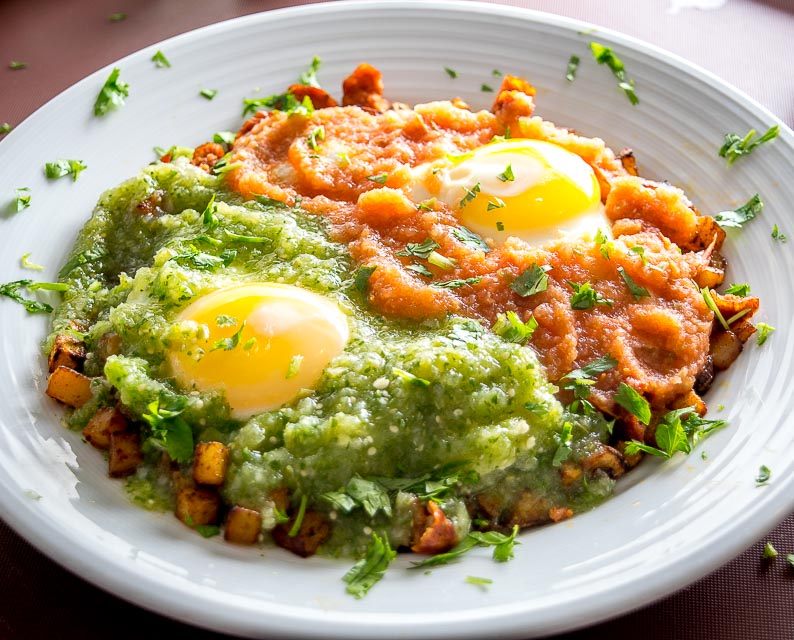